I have several faded memories of parades in the Ford. Once I rode on the First Christian Church float (in a big wagon with all the other Sunday School kids, if I remember right) while my cousin rode her cute little kiddie car. (I wonder if her legs hurt from pedalling when it was over?) And another time I rode with my cousin, Randall, on his horse, Randy. Both parades were to celebrate The Rodeo! We loved those rodeos!

When my family moved to C-Town, there wasn’t a rodeo, so no rodeo parade. Instead, C-Town celebrated the opening of the Cherokee Outlet on September 16th of each year. (Or maybe it was the closest Saturday to that date.) 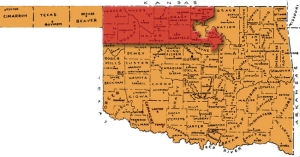 Over six millions acres had been up for grabs that day in 1893.

I’m sure there were people around when I was a kid who’d made the run, but I didn’t know any.

Doesn’t the land run look like it was exciting? 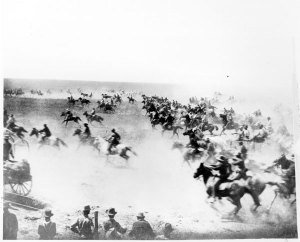 We’ve all seen the movies, watched the experience through the TV screen. But imagine actually being there for that adrenalin rush. Whoa! 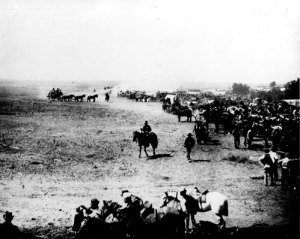 Photographer William S. Prettyman learned that the opening of the Cherokee Strip was going to be the biggest land run of all, so he built a tower at the edge of the run, put three cameras there with three photographers. He took the above picture himself, then ran to get in the race.

I read several accounts of people trying to sign up to be part of the run. Hot, dusty, discouraging days with water costing a nickel a drink and standing in line from can’t see to can’t see and still not getting a certificate to run must have been disheartening. And even when they’d signed up, they weren’t guaranteed to get land.

The people were strong hearted gamblers, for sure!

Back when I was a kid and we had a celebration, but we DIDN’T have a landrun. Not even a pretend one. (Maybe the memories were still too fresh.) Instead we had a parade. 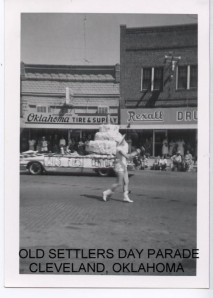 This picture must have been taken at a parade before we moved to C-Town. I don’t remember them calling it Old Settlers Day, but I do remember the Otasco Store and drug store being there. 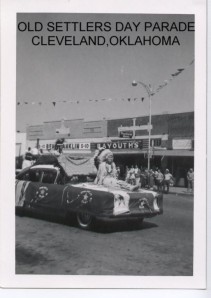 And I remember Bayouth’s being next door to Ben Franklin. 🙂

We had street dances to celebrate the opening, beard growing contests (for men only) and free (!) delicious (!!) barbecue sandwiches!!! (I remember standing in line for those. YUM! Wonder if they came from Dari Diner?)

Sometimes we had a pet and bicycle parade. I wanted to take our toy Manchester Terrier, Tiny, in the parade one year, but she wouldn’t walk on a leash. I didn’t think it would look very good to drag this little five-pound black dog for six blocks on the end of a chain, so I decided to carry her in a baby’s bath tub.

When I was in the garage finding the tub, I noticed a box of crocheted baby clothes someone had given Mom, so I dressed Tiny in a frilly little pink jacket and bonnet.

That stubborn little mongrel won Best Dressed Pet (could have been ONLY dressed pet) and I won a dollar!

For a while after Keystone Lake was built, C-Town stopped having Pioneer Day and started have Jolly Roger Day. After several years, though, we reverted to PD. A much better way to celebrate our heritage.

Besides, I got tired of walking around in an eye patch and saying, “Arrrrrr!” 😉