It’s been a long time since my family has taken a family photo. I’m not talking snapshots. I take tons of those. 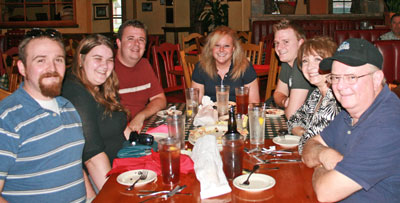 This pic is BN (Before Nikki.)

I’m talking the thing where you dress up with a goal in mind. Where there are no dishes on the table.

You know what I mean. Truly,

Did you hear the Angel Choir sing when you read those three words? I’m sure they did, because God loves family and He loves it when we take a beautiful picture of the whole crew.

I might be able to find a scripture to back that up if you give me time. Maybe.

It’s also been a long time since I’ve sent out Christmas cards, letters or greetings of any sort. So I thought, why not do a family picture since all my boys are married now and send them for Christmas?

After all, my favorite Christmas greetings are ones with family pictures like my sister-in-law, Julie, usually sends out, and I could include it in a letter like the Cathys send out. (Forever Friend, Cathy, and #1 son’s mother-in-law, Cathy=the Cathys. Get it?) Christmas letters catch everyone up on family happenings for the past year.

Don’t you just love those?

I look forward to them all year long. Maybe someone would enjoy a letter like that from us! (And the ones who don’t could just toss them and I wouldn’t be the wiser.)

AND I’d get a FAMILY PHOTOGRAPH to frame.

I don’t know if you can see this, but it’s the boys when they were just little. That’s probably the only family picture Christmas card I’ve ever sent out.

So, back to my plan. I decided I want a family photo. I set the date. I set the place–a beautiful town with wonderful historic sights. I even set the time–a weekend when there’d be tons of gorgeous autumn leaves for background.

I let everyone know a few weeks ahead of time. (Me, making plans that far ahead is a miracle in itself.)

I was pumped. This could work!

Right away, I ordered a new lens for my camera, found the tripod and bought a remote control thingy that actually shoots the picture while the whole family smiles.

Almost immediately, my bright dreams crashed like a china shop with a three-year-old running it. One of the kids had a conflict. It was a really excellent family reason he couldn’t be there for the picture. As a woman who believes in family, I couldn’t find fault with what he needed to do. In fact, I WANT him to do it. But that didn’t stop my disappointment. *sniff*

#1 DIL had a great idea, though. “We’ll just photoshop them in. We can do this!”

Ooooh-kay. That might just work. Then a few other conflicts started popping up. Work commitments and school things that, while they don’t completely stop the photo shoot, will change the perimeters. But it’s still doable.

I hope. If the day I have planned doesn’t get rained out. And if I can get everyone to behave just for a little while.

If it doesn’t work out, I’ll just schedule another shoot, maybe at a park in T-Town with beautiful leaves and fountains and bridges and scenery, and I’ll tell them all they have to be there for the Christmas Card Shoot.

If that one doesn’t work out, I’ll schedule another. And another. Finally, they’ll have to give in. Right?

I WANT A FAMILY PHOTOGRAPH!