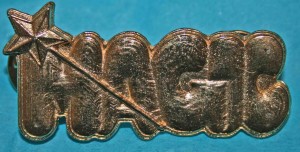 I mentioned that I’m a finalist in Where the Magic Begins, didn’t I? Like, maybe a thousand times? 😉 I’m entered in an unpublished contest because this is a different category than I’ve written in before.

The category is Sweet Contemporary, which for me means Christian Women’s Fiction or Inspirational. In the past, I’ve always written Single Title or Sensual Contempory. The difference is a real eye opener.

Why did I change?

Last November, I entered NaNoWriMo, and it had a real effect on me.

From Wikipedia–National Novel Writing Month –also known as NaNoWriMo /ˌnænoʊˈraɪmoʊ/– is an annual internet-based creative writing project which challenges participants to write 50,000 words of a new novel in one month.

I was writing along on a project, and not a bad one, and doing really well. I’d figured how many words a day I had to write to get the book finished by the end of the month, then I wrote more than that. I was ahead of the game, when a still, small whisper of a thought came to me.

The more I worked, the louder that whisper became until there was a deafening din inside me every morning when I got up to write.

THIS IS NOT YOU! IT’S NOT WHO YOU ARE. IT’S NOT THE LEGACY YOU WANT TO LEAVE BEHIND.

The thought was right. It wasn’t me. From what I understood to be the rules of the road for that type of book, my characters couldn’t live their lives the way I try to live mine. They couldn’t pray (very much, anyway) about problems, spend time in the Word or practice the presence of God. So I stopped working on that book. I doubt I’ll finish it.

The book I entered in the contest is my first attempt at Christian Women’s Fiction. We’ll see how it goes.

If you’d like to read the first little bit, here it is–

Since when did kindergarteners throw such a mean elbow? Dr. Joe Gardner sidestepped the blow aimed at his diaphragm. The child’s piercing cry as he squirmed on the table was impossible to block, but fear caused it. Not pain.

Joe shot Edna a furious glance. “What are you—” Pain exploded between his legs, sickening him to his gut as the kid’s heels connected a solid blow. Fighting the urge to collapse on the floor, curl in a fetal position and vomit up his breakfast, he leaned against the equipment cabinet and tried to breathe.

As his vision cleared, he stared at the nurse. “What . . . ” Just that word sent pain radiating again. Swallowing hard, he drew a slow breath. “Why did you send—?”

Eyes snapping, she frowned.  “Typical doctor. Her name is Sara Charles and she does more good than most doctors.”

He’d return her look if he could only stop hunching over, but he’d learned not to glare from an inferior position a long time ago. Nurses would run over you. And being the new guy at the hospital, he couldn’t afford that.

But it hurt so darn much. He closed his eyes and, taking a breath, he straightened the knee he’d cocked too slowly to block the boy’s kick and forced his back erect. And when he opened his eyes, an angel walked into the room.

Trauma there causes hallucinations? He blinked hard and looked again.

The woman’s gaze settled on him, dismissed him as insignificant, then focused elsewhere. Her dark hair—or was it red?—was drawn back to a low ponytail. Slender, but not painfully so, she had a figure that at one time would have made him drool.

The woman had a quick, quiet conversation with Edna, then turned to the little boy, now curled up on the table. Probably exhausted from his winning bout with Joe.

Will I be able to sell it? I don’t know, but I hope so. I do know if it’s God’s will, I absolutely will. Guess I’ll just have to wait and see. 😉

As I’ve mentioned, I started a new stocking for my newest DIL2b (daughter-in-law to be).

Here’s where I got started.

I got a lot done the rest of the day Saturday and Sunday. Here’s where I am now. 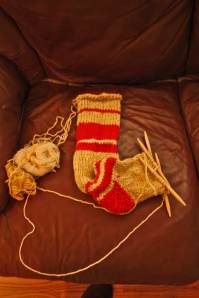 Pretty much just the toe left to knit. It’s going to be red. 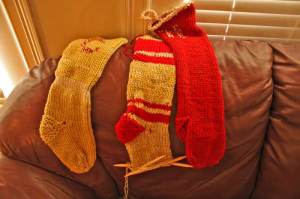 Of course, I still have to do the edging, hanger and her initial. That won’t take too long. I should have it finished before we have to hang the stockings. (Officially, that’s Christmas Eve. Right?)

So that’s kind of success. If you notice the pictures, though, they’re a little dark. And that’s after I worked on them in Elements. 😦 One of my goals is to successfully use the “P” setting on my Canon Rebel. (Program setting) Not doing well with that. Not at all.

I think I’m going to have to have someone take me by the hand to teach me.

And as I stupidly told the world, I did NaNoWriMo this month. (That’s where you write 50,000 words in one month.)

I probably  should have waited for another year because my story wasn’t ready to start. I didn’t even have an outline. Just a vague idea.

Besides, it’s a stupid story. No, I take that back. It’s a great story. The trouble is the black moment. I’m not finding a motivation strong enough to keep the Hero and Heroine apart.

If I have an epiphany, and can write, write, write, I’ll let you know. Right now I’m taking punk status. Not a good thing, but survivable.

Suggestions or help–with either Nano or using my camera’s P setting–I’m eager and waiting!