I have something really cute to show you. Wanna see?

This is my mom’s dad when he was a teenager. Isn’t he adorable? (I think he looks like Nephew Phillip.)

I love the chain going from under the tie to his shirt pocket. Makes me think he had a new pocket watch and couldn’t wait to put on his suit to wear it. He could have put it in his pant pocket, but then it wouldn’t show in the picture. 🙂

Granddad was in World War I, and just before he left for San Antonio, where he was stationed, he married Grandma. This is their wedding photo, taken in 1917.

Granddad was in his early twenties here. Are you loving his hairdo? I’m sure it disappeared as soon as he got in the army. 😉 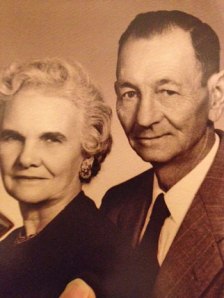 This is the way I remember him looking. Some of my favorite things I remember about Granddad–

When I was little, he had a cool pickup (I remember it being a granite blue color) that went a-OOO-gah! If I remember right, it burned up in a well fire. 😦

Granddad loved to fish and take his grandkids fishing.

He nearly always wore a hat. Not a ball cap. A really cool hat.

I’m not sure what it’s called, but I love it. (It hangs on my wall.) Granddad must have, too. He used it for shade, a fan, a swatter, and when in a pinch, he used it for an ashtray.

At one time or another, Granddad had a chicken farm near Tahlequah years ago, he worked in the oilfield, and more often than not, he farmed. (Often while working another job.) During the Great Depression, he went to another state and worked to support his family of seven (!) children.

One memory stands out in my mind. Once Sister Debbie and I stayed a week with G & G at their farm near Tahlequah. Granddad was working in his garden while Debbie and I climbed a tree. I was getting pretty brave, and had my feet higher than my head when the small branches I held onto snapped. I landed on Deb (she still claims she saved my life) and we both tipped, about to topple out of that tree, several feet to the ground.

Granddad saw us falling, dropped his hoe and raced across the garden to catch us both. I was impressed a guy that old could run so fast.

I remember going to church with him on that trip, too, and hearing him sing. Seems like he might have led the singing, too. (Maybe that’s where Brother Jeffrey got that talent!) And we fished in the Illinois River.

Do you have happy memories of your granddad (or mine) you can share? YAY! The weekend is here!

Funny how the prospect of “weekend” changes. As a kid looking toward a weekend, I saw two empty days with nothing much to do except play and go to church.

As an adult, it’s a chance to spend time with my honey and catch up on chores we can’t get done during the workweek.

When I was a kid, summers seemed like long, long weekends. Nothing much to do except play and swim and go to church. And church camp. As an adult, it’s a time with more chores to catch up on the weekends.

I was talking to one of my nieces yesterday and she said, “I haven’t had any summer yet. Not really.”

That stopped me. Here it is, the end of June and we’ve had plenty of hot, hot, hot (triple degree heat) weather. Lots of sweat. Tons of sunshine. She couldn’t mean summer temps.

And she’s been on at least two fun trips so far–Six Flags over Texas and canoing down the Illinois River.

She’s been swimming, to basketball camp and cheering. What more could a girl want?

I had to find out. “What makes summer really summer?” I asked.

Maybe that’s a good way to look at it. If she can just sleep in, she can have summertime all year round. 😛