A couple of weeks ago, G-Man, Sisters Debbie, Cindy and I went to Grand Junction. To get there, we passed through Denver, where we first found mountains. (I love mountains, don’t you?)

Surprisingly, even though it was early afternoon, the road to the mountains was bumper to bumper much of the way. Turned out to be a good thing, though, because we moved slow enough for me to get this on my phone. 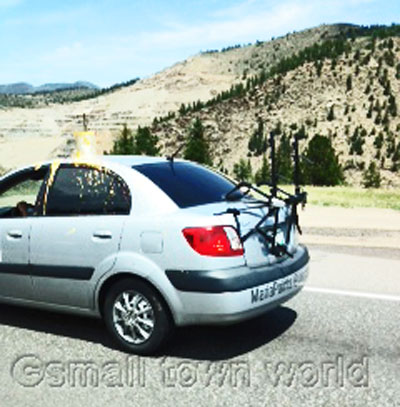 Can you tell what it is? Yes, it’s a car with a bike rack on the back (we saw bikes everywhere we went for the next several hundred miles) but can you tell what’s on top and dribbled down the side? 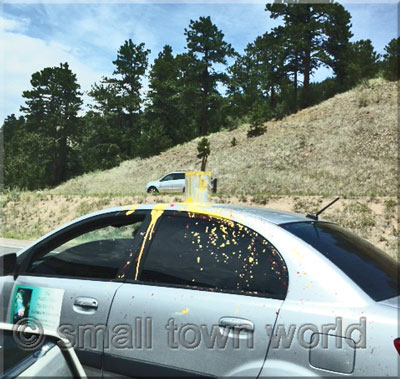 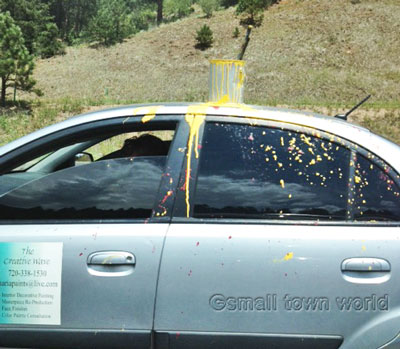 I’ll bet you can see it now, can’t you? The car was owned by a paint company (I tried to get the sign on the side of the car, but I can’t read it now.) So clever!

I’m not sure how an advertiser’s mind works, but I think it would be wonderful to brainstorm with the guy who came up with this idea. It made me–and probably lots of other people–smile for a long, long way.

In case you still can’t see it, here it is, up close and personal. 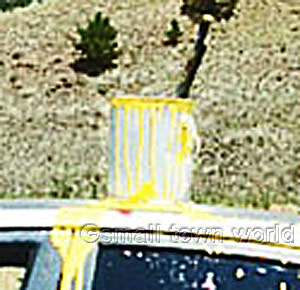 See? It’s a paint can with a brush left in it. Looks as if they were painting the garage, using the top of the car to set the can on, then got a call and had to rush away, which caused paint to splash down the side of the car.

Of course, weird brain that I have, I started imagining what would cause the driver to take off in such a hurry.

“Your wife is in labor. GET HERE NOW!”

“Close out sale. Buy one new car, get one free! While quantites last.”

How about it? Do you have any ideas?

Want to see some of the pictures from the Colorado National Monument? I hope so, ’cause here they are.

Isn’t it beautiful? Imagine living with that in your back yard. I could handle that–if they could move those mountains to Okie-Land.

We had a ton of fun driving through the monument. Sister Debbie and I both have a slight problem with heights. So much that we leaned away from the sheer drop offs along the road as if we could keep the car from going over.

Our toes tingled when we got close to the edge of a lookout. (I felt like crawling, but I didn’t. Really, I didn’t!) Sometimes our toes tingled all the way to our armpits!

Even though one of our shirttail relatives thinks Sister Debbie is shy (clearing my throat) I found her chatting up a couple of strangers while I was trying to get this little guy’s autograph. 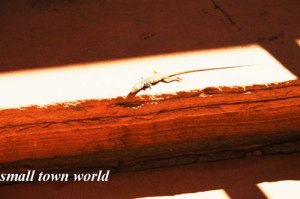 That couple wanted us to take their picture and make it look “like a postcard.” Then they took ours. 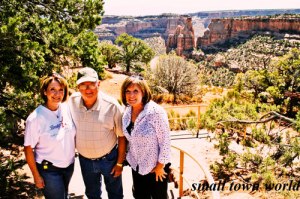 If you notice, Deb is leaning ever so slightly away from the drop off.

I took their picture with their camera (makes sense, doesn’t it?) but I caught a picture of their motorcycle for you. Isn’t it cute? 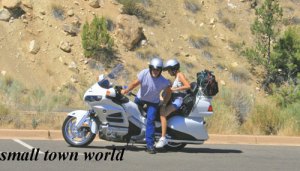 Cute bike, isn’t it? They were from Texas–clear down around Galveston. I hope they didn’t ride that motorcycle that far, but they could have. (Hurts me to think about.) 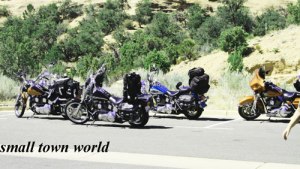 I think they rode all the way there on those bikes, and probably camped out at night. One of that crew caught me drooling and taking pictures of the bikes instead of the million dollar scenery behind me. “I like your cycle,” I gasped.

He thought I was pretty funny. 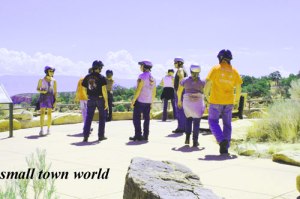 There were men and women riding the Harleys from several different states, including Okie-Land and Missouri.

I loved this tag– 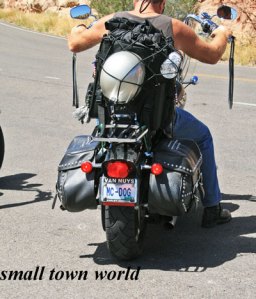 Cool bike, cool tag. Can you read it? 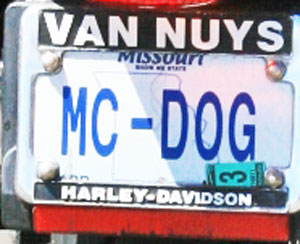 I asked the couple on the white bike if they were with the crew on the Harleys. They weren’t. 🙂 But they could have been. The cycles made for some entertaining Monument Moments.

When we were all looking over a precipice that gave Deb and me tingles at least to our knees, we noticed a couple of huge birds sailing below us.

Yes, they were LOWER than we were, and gliding on the air currents. Gives me a tingle just thinking about it. Anyway, one of the biker women said, “I believe they’re California Condors.”

G-Man snorted as we went down the steps to get even closer to the edge. “They’re plain old vultures.”

Vultures? Ugly birds with red heads that like eating carrion–dead stuff. That made me think of G-Man’s show he watches–“I Killed My Wife, and Here’s How I did It.” Okay, that’s not really the title, but it should be. It’s really 20-20 or Dateline or something.

“This reminds me of some of those shows you watch,” I told him. “You know, where the husband tosses the wife off the cliff, then tells the cops she slipped.”

He nodded, telling me he remembered it. (Sometimes G-Man’s a man of few words, so I’ve learned to read his nods.)

I looked way, way down, past those gliding birds, all the way to the ground so far below us. As I did, I started tingling clear up to my shoulders.