Yikes! I missed saying hi yesterday. I just hope that didn’t scare you.

I just now realized that, being it was December 21, 2012 yesterday, you might have thought I’d disappeared with the Mayans. Or that the planets (aligned for the only time in the past six hundred jillion years) made a magnetic gateway and sucked me away to that happy place over the rainbow.

I know you’re relieved to find out I was only sucked into the world of Christmas while I wrapped gifts. Blogworld slipped my mind.

The good news is, I have most of my gifts wrapped. The bad news is, I was late for work for about the 30th time this week. And since I only have five work days in a week, that’s not an easy thing to do.

These are a pair of shoes I bought at my Forever Friend’s aunt’s estate sale. I’ve had them several years, and this year I thought they needed to come out of the closet. Kinda cool, huh?

Here’s my feather tree. I usually put on the yellow and green balls that came with it, but this year I thought candy canes. Pretty, and edible. What’s better than that when it comes to decorations?

This is the kitchen. I’ve had the triple candle lights since we lived in Pryor Creek. I thought it made the wreaths look  homey and warmish this year. 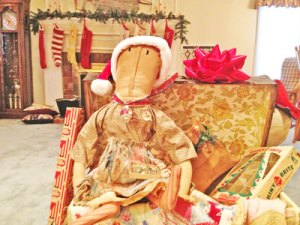 This is the doll I bought at War Eagle in the fall. She’s all dressed up for Christmas –well, she has a new necklace and a Santy hat–and she’s sitting in the trunk my kiddos bought me last Christmas. (I love it!)

But the poor dear still doesn’t have a name. I’ve been thinking about a few such as Gussie, Matilda and Minerva. Leaning toward Gussie at this point. Which ever I choose, I have a feeling she won’t be happy with it. I never have seen her smile.

Maybe if she gets a present under the Christmas Tree, she’ll cheer up. 🙂

Know whose birthday is coming up in a little over a week? 🙂

Those are some of His names in my header. I decided to do that because I read of a woman who made wire Christmas ornaments of some of Jesus’s names. She thought it was important for her kids that He have a presence on their Christmas tree, and now she has them for sale. You can see them here.

But I’d seen a beautiful “sign” at Thanksgiving, and thought I’d like to do that with Jesus’s names. (Those little ornaments would get lost on my tree full of pictures and bling.) So I started trying to figure out how to make one of those signs.

I planned to finish it in 8 1/2 X 11, print it out and either frame it or Modge Podge it on a board. But seeing that Christmas is just a little over a week away, I don’t know if that’s going to happen or not.

Do you know what happens when you start doing something like this sign with the names of Jesus? His names start standing up and making themselves known.

I wish I could tell you my favorite of them. One moment I think it’s “I Am,” next I think it’s, “Lover of My Soul,” or “Lamb of God” who was sacrifice for my sins. Or maybe it’s “Immanuel, God with Us.”

God With Us. I love that.

But my favorite? I don’t know. Last night was the final leg of Christmas–our celebration with Dad and sibs. Oh, and spouses, kids and their spouses and kids were there, too. Some of them at least.

As usual, we gathered at Sister Debbie’s house. Debbie is the consummate hostess. Her house is decorated as if she were Mrs. Claus and the food was fantastic.

#4 wasn’t able to be there. (She lives in a far away land.) I sent her pictures and love during the celebration so she could still be part of things.

Our entertainment was so much fun. During the first part of the evening, Sister Debbie’s younger granddaughter watched us all dance as we tried to make her smile. She was just a little bit tired from all the Christmas fun she’d had, and since she isn’t a year old yet, it’s understandable she might get a little bit pooped out. And later Sister Cindy’s older grandson danced for us. (He turned a year old on the day I celebrated a year of pain free walking.) The child is full of personality and joy, and he even climbed on my lap for a moment or two.

We played Dirty Santa for ornaments, and like a dummy, I was the only one who actually made her own ornament to take.

The first one I made was this–

I knitted it from a show I watch on TV called Knitty Gritty. It’s one of my favorite shows, but they aren’t making any new segments. I watch the reruns faithfully and hope they’ll start making new ones.

When I finished making the flower, it curled and flopped, so I wired the petals–not ideal if people are going to be handling it. (The poinsettia on TV was stiffer because they made it from wool and then washed it to turn it into a fabric. I didn’t do that.)

Rather than chance having someone get poked by the poinsettia, I decided to make another ornament.

SD had mentioned taking ornaments that represent us, so I took a clear ball and put in lavender I’d dried last summer (because I’m a gardener) and “yarn”, which was really cross-stitch thread (because I’m a snitter) and a little snow (because I love snow) and a few sparkles just for the heck of it.

I don’t know that my niece who won it was thrilled, but it was fun to make. I tried one with miniature jingle bells, but the glass is so fragile on those clear ornaments that anything that heavy will break out the side. Or you have to not shake them, and who can hold an ornament with stuff inside and not shake it?

So this is what the one I took looks like– 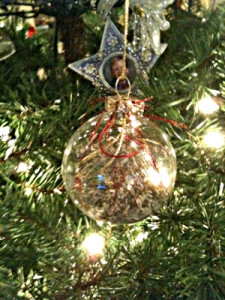 I stole a good sized, sparkly gingerbread man from one of my BILs. When he pulled him out of the bag, Jeffrey put on his falsetto voice. “Don’t eat my gum drop buttons!” A line from one of the Shrek movies.

That’s another game we played last night. Actually, it’s more of an ongoing thing. We do movie quotes that go along with the action. (“Hello movie house!”) and the others try to guess the movie.

Funny thing is, my kids do the same thing and make it harder by throwing in a TV show along the way. Great fun if you watch the same stuff; a little tougher if you don’t.

The Dirty Santa big hit with the babies was a dancing snowman with a flashing nose that sang a song no one recognized. Brother Jeffrey ended up with an ornament that was a pair of six shooters (perfect!) and Sister Debbie got “Mine’s bigger than yours is.”

Did we have fun? Yes!

Would I change a thing? Only to get others there who weren’t able to make it.

If at all possible, will we do the same thing next year?   What do you think? 😉

We have a fantastic store here in C-Town called Celebrations where you can get anything wonderful you really need. They have fresh flowers, plants, gifts, edible stuff (like dips) gifts, apple cider mix, dishes, Christmas ornaments, Christmas candles, Christmas gifts and poinsettia.

All the truly important stuff.

And very friendly sales people who a helpful and even wrap for you. And like doing it! (My sister works there. Can you tell?)

Did I mention they have gifts? Adorable gifts. The kind of thing you’d like to get if you were receiving instead of giving.

I bought these there a few years ago. Aren’t they adorable? (They turned up when I cleaned my office last weekend–probably the first time since I bought them. Cool, huh?)

But Celebrations was awful. After what they did, I probably won’t be able to eat a bite. (Or else I’ll eat all of C-Town.)

I just know all my hair will fall out! I might even chew my nails to the quick. (If I had nails, I’m sure I would.)

I won’t be able to sleep a wink until New Years.

So what was the nasty thing Celebrations did?

“Not to panic you or anything, but we are just a little more than TWO weeks till  Christmas? Do you have all your shopping done?” 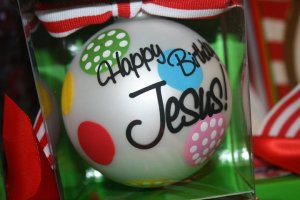 The answer is no. I don’t. I’ve only bought one gift.

In case you read this, Celebration Ladies, I love you more than my shoes (ornaments)! 🙂

BTW: In case you’re wondering, I “borrowed” some of these pictures off their fan page on FACEBOOK. Hope that’s okay. 🙂