What do you do when you have to do something you really don’t want to do?

Maybe you don’t want to because you’re not sure how to do it. Maybe you just don’t like it. Or maybe you’re afraid you won’t be able to do it the way you ought to, but you have to, so you’ve got to find a way.

What do you do?

For me, the answer to that strange and winding question is–I CALL MY SIBLING!

Luckily, I have four sisters and a brother to choose from. 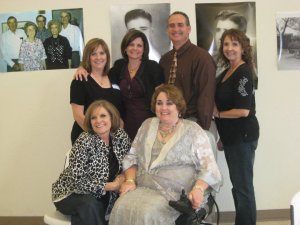 I’ve always told my kids that the best friends they’ll ever have in life are their siblings. They’ll be there for you when you really need them, and you absolutely want to be there for them. Always.

Why should it be true that the best friends you’ll ever have are your sibs?

These are the people who, even though they know all the bad things about you, also remember all the good things. And they love you anyway.

And otherwise, your mama will smack you. 🙂

Who else truly understands the depth of tragedy when you suddenly lose your mother?

Who else gets the joy you have being with your dad?

Who else knows family history back to the beginning of time?

Who else met God the way you did?

Who else can you tell your secrets and rest assured they’ll never be repeated?

Who else will walk through fire for you?

Friends are wonderful.
Children are a joy.
A loving husband is a gift from God!

But siblings are absolutely necessary.

Besides, who else can you be sure will goose you when you’re taking a picture? 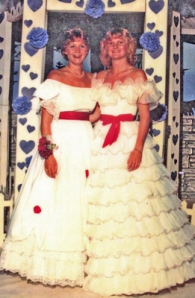 Aren’t they just adorable? They were so close, they did nearly everything together. Amy, on the left, was football queen, and Jonna, on the right, was basketball queen.

Amy is my sister, and she’s at her senior prom with her Forever Friend. They’ve been friends since before they knew what the word meant, and they’ve been through everything together. Each has supported the other without doubt or question.

Here’s what Amy had to say about Mother’s Day on Facebook:

I got a mother’s weekend. We started out Friday night they took me to dinner@ Steer Inn, then we delivered a mother’s day gift to My step mother, Romanza. Sat. Night we went to Josephs, fabulous steak. Mother’s day they took me to Billy Simms BBQ. I have the best family! I’m so glad God allowed me to be a momma again!

Read that last line again. She’s so glad. I’m telling you, Amy is one of my life’s heroes. There’s no bitterness in this woman. She’s never fussed or fumed about her losses. Never asked if she was being punished.

She only praises God for allowing her to be a momma again.

I’ve never known anyone who could go through what she has without complaining. We didn’t know if she’d be able to have more children after the awful wreck she lived through, but she not only had two babies, who are now big girls, she fed the last one from her own body. You’ve got to admire a woman like that.

I’ve seen her shed very few tears. (I’m a much bigger crier than she is.) She knows she’ll be with her daughters in eternity. I imagine our mom is celebrating Mother’s Day in heaven with them.

And Who is leading that celebration?

“Can a woman forget her own baby, and not love the child she bore?
Even if a mother should forget her child, I will never forget you.” Isaiah 49:15

“As a mother comforts her child,
so will I comfort you;
and you will be comforted over Jerusalem.” Isaiah 66:13

If you’re a mom, I hope you got to be with your kids. If you couldn’t, thank God for them. They are a blessing!

If your mother is living, I hope you got to be with her. If not, I hope you thanked God for her.

How did you celebrate Mother’s Day?

This is my baby boy. Not much of a baby, but he’ll always be mine. He’s such a funny kid.

He’s my only child who has been organized from the beginning of time. He doesn’t just keep things put away, he organizes his time. His studies. His money. You name it, and he’ll find a way to take care of it.

Before Brad started school, as we were getting ready to go on a vacation one year, he said, “What about my other brother?”

“Your brothers are going.” I pointed at my older boys. “See? Danny and Matt. They’re ready to go.”

“No. My other brother.” BB was getting a little frustrated with me by this time. “At Miss Kimmy’s.”

“Little Bradley. He’s my brother, too.” Little Bradley was his best bud at Miss Kimmy’s–their babysitter. They were always together, even at church. I guess he thought since their names were the same (both Bradley) and he liked him so much, they had to be brothers.

Since I didn’t have the strength to handle another boy, I quickly explained he didn’t have another brother, and while he was a very nice boy, he couldn’t be Brad’s brother because Little Brad’s mom, whose name was also Susan, would cry too much.

Escaped that one by the skin of my teeth! 😉

When he was in 3rd or 4th grade, BB had appendicitis and nearly scared the liver out of me. That was an outpatient procedure (go figure that one) and less than twenty-four hours later when he went home, that tiny little boy had some heavy duty pain pills. So heavy duty, when he tried to leave a room once (I’d turned loose of him to get something) he missed the door and hit the wall.

But he survived, and now has a nice scar to show for it.

On Easter Sunday 1995, BB was baptised into Christ. Three days later, Timothy McVeigh murdered 168 men, women and children, 19 of whom were under the age of six in Oklahoma City.

When BB was in middle school or early in high school, he decided he wanted to be an orthodontist. Here’s why–he’d thought his teeth were so ugly before he had braces (they weren’t that bad) he wouldn’t smile. And he didn’t talk to people much because he didn’t want them to see.

His beautiful teeth made such a difference to him, he wanted to be able to do that for other kids.

BB is now a college graduate, engaged to marry a beautiful and brilliant girl. (I love it when my children marry beautiful, smart girls who are from this area so I don’t have to worry about them moving close to HER parents. I need my kids and grandkids close by.)

We’re hoping he’ll get into dental school next fall. All fingers and toes crossed on that one. (If you have any pull in that area, please use it for us!) And, no surprise, he’s very good at working with children. I’m not sure he still plans to be an orthodontist, but he wants to have a pediatric practice. (Gotta give him kudos for that!)

Because of my sons, I understand why the Psalmist wrote, “Sons are a heritage from the Lord, children a reward from him.” Psalm 127:2.

Sons may be the pride of their father, but they’re the heart of their mother.

One more story–after the wreck when we lost most of the women in our lives, I felt very alone. I couldn’t even feel God anymore (even though I knew He was there and talked to Him non-stop!)

At that huge funeral things got mixed up and my little family wasn’t able to sit with my dad and sibs and their families. Bradley, still in kindergarten, must have known how absolutely alone I felt. Even though we were sitting in hard plastic chairs, he got out of his and came to sit with me. During that time when I needed so much, he was there to hold onto.

As nice girls, my sisters and I were taught not to brag–and we Spess girls learned the lesson well. We didn’t brag that we had the toughest jeans or most tangled hair.

We never bragged that our dad was smartest or that our mom was prettiest (although they were!)

When we grew up and married, we didn’t brag about whose husband had the most hair or whose house had the fewest termites.

We didn’t even brag about our kids being sweetest/smartest/most athletic/had teeth at the youngest age or got potty trained the earliest. (Maybe because they weren’t/didn’t.)

But let me tell you, when grandkids start making the scene, there are no holds barred!

Here’s the deal–I have no grandchildren. Sister Lisa has one, Sister Cindy has two, and Sister Debbie has two.

Just yesterday I called Sister Lisa, and who did she let answer the phone? Her brilliant and beautiful soon-to-have-a-birthday grandson!

And yesterday, the same day, Sister Debbie played Grandmommie right in front of me.

That’s right, she had BOTH her granddaughters for the day. One is a two-year-old and the other ten months. Because she was having so much fun, Sister D invited me, Sister Amy and friend, Bev, over for lunch.

Is that shameless bragging or what?

And to make matters worse, both are beautiful and brilliant.

I wonder if there’s an adopt a grandbaby program I can get into? I want one!