Are you ready for the big day? I’m not sure I’m ever really ready, but since I have yet to learn how to stop time, it’s coming anyway. 😉

One of my favorite things about Christmas has always been the Sunday before. I have tons of memories of me, my sisters and Mama, all in matching velvet dresses on Christmas Sunday. Sometimes Mom got Jeffrey in a matching velvet vest, but for some reason could never get Dad in one. 🙂 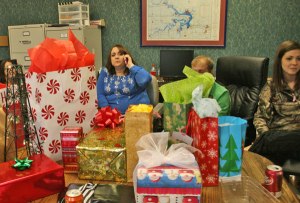 I still love church on Christmas Sunday. We sing all the songs I’ve always loved, or most of them. And we hear about the Bethlehem Adventure–or at least part of it, depending on the preacher and what God gives him to share.

I love learning what I think I know and realize I don’t know. Like the wise men. You know, like the song. “We Three Kings of Orient are . . . ” and learning I don’t know how many Wise Men there were. (No one does.) And the idea that Mary rode a donkey when she and Joseph went to Bethlehem. Go back and read it again. Where’s that donkey? 😦 Poor Mary. 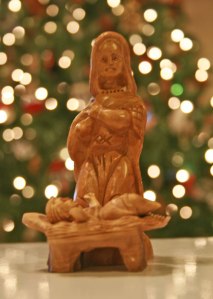 More than anything, I like the reminder that Immanuel (God with us) who created the universe, became an infant so that thirty odd years later He could die for our sins. Our sins, not His. (He was perfect.) No matter how many rules we had, we couldn’t be perfect enough. But He is God, so He’s perfect, the Lamb of God, sacrificed for our sins.

His presence (remember, He’s Immanuel, God with us) is our present for eternity.

One week until Christmas. This morning I’m going to stop worrying about gifts and trees and other temporary things for a little while and consider the Reason for the Season. Jesus.

I have Luke 2:11-12 on a sticky note, which keeps it at the top of my blogs until I take it down. (It’s there because #4 and I are memorizing it for our final SSMT of the year.)

Yesterday I heard a man talking about how the shepherds, who were first to hear the Good News, and when they did, they RAN  to find Him.

I don’t know what else the man had to say because my mind took off. Maybe it’s the writer in me, but I couldn’t keep from thinking about it in the angels’ point of view.

Imagine, being in Heaven when the announcement was ready to be made. Today, God has become a man!!! He is Christ, the Saviour. Were the angels all excited? Did they all want to get to announce the news?

Can’t you see them, all standing on tiptoe, hoping Yahweh will choose them to give the announcement that Christ, the Saviour, has been born?

Finally, one gets the job, and gives the word to the shepherds.

“Do not be afraid. I bring you good news that will cause great joy for all the people. 11 Today in the town of David a Savior has been born to you; he is the Messiah, the Lord. 12 This will be a sign to you: You will find a baby wrapped in cloths and lying in a manger.”

But the rest of the angels can’t stand it. They have to sing out their joy.

Glory to God in the highest! And on earth peace to men on whom his favor rests.

Next my  brain switches to the Shepherds’ POV. (Point of View)

Out of nowhere, a being appears who is unmistakably an angel. The shepherds don’t question that it was an angel.

The glory of the Lord shone around them and they were terrified!

When they see the angel, I imagine they all froze.

Don’t you imagine all the shepherd’s crooks hit the ground?

“I bring you good tidings of great joy that will be for all people.”

When the angel who brought the news finishes the announcement, as if to prove to the shepherd they hadn’t imagined the single angel, a whole flock of angels appear.

“Glory to God in the highest! And on earth peace to men on whom his favor rests.”

When the angels were gone and the sky was black again, the shepherds ran to find the Christ Child.

When they had seen him, they spread the word concerning what had been told them about this child, 18 and all who heard it were amazed at what the shepherds said to them.

Okay, maybe that’s why God decided to tell the shepherds first, because He knew they would spread the word.

Now can you put yourself in Mary’s place? She’s a young girl, a virgin, who has traveled far from her home with the man she’s going to marry. I think I read someplace that it took them about a week to travel to Bethlehem.

The last week before my first child was born, Mom made me stop driving a few blocks to work at Four Seasons, our dress shop. (I think she was afraid I’d slip and fall in the snow and have him on Broadway.)

Mary either walked or rode a donkey for most of that week as she traveled to Bethlehem.

The night before my first son was born, I wasn’t comfortable any place–walking, sitting or lying down. I went to a basket ball game, but couldn’t stay too long because #1 son’s feet were in my ribs.

Try to imagine the exhausted girl, Mary, and Joseph as they tried to find a place for her to rest. When the pains started, had they found the stable? Or did the man who owned the inn see that she was in labor and send them to the barn after he heard her cries?

Was Mary frightened as she had God’s son? I doubt that He took away the pain of childbirth. When her body worked to expel Christ, Creator of the Universe, and the only person with her was a man who’d never been married or delivered a child while a barn full of animals looked on, was she surprised or taken aback?

I was when my body took over, even though I’d read the books and gone through the classes.

19 But Mary treasured up all these things and pondered them in her heart.

20 The shepherds returned, glorifying and praising God for all the things they had heard and seen, which were just as they had been told.

Ready for True Christmas? I am. I want to celebrate The Reason for The Season all year ’round.

Wishing you and your family a wonderful faith filled Christmas.

Have you caught the Spirit of Christmas yet? If you’re like me, it’s a hard thing to do. Between decorating, shopping, wrapping, working and hoping I got all the right gifts, the true spirit kind of gets away from me.

But I can find the Christmas Spirit if I’ll take the time to do one thing. Read and meditate on Luke 2:1-20.

When I was in Sixth Grade, Miss Thelma asked me to be the narrator for the Christmas Play. Yep, I’m that old. We really could read the Bible AND PRAY when I was in school.

I memorized the entire scripture that night. If I had to do it today, I doubt if I could. It takes me two weeks to memorize one SSMT verse these days. But that night it wasn’t hard.

Here’s how I did it. That night while Mom cooked supper, I crashed on the couch and tossed my feet up on the back. The scripture was typed out, so I just read the passage again and again. While I read it, I could see it in my mind.

I’m sure having seen the Christmas Story in plays and on TV all my life helped. 🙂 I could see Joseph walking along, leading the donkey with a very pregnant Mary on its back. For me, it’s night time.

I know, it couldn’t have been night through the entire trip–90 miles or so–because it took at least a week to complete. (Longer if Mary needed potty breaks as often as I did when I was pregnant.) 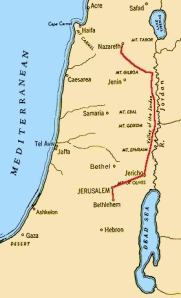 This map is from Holymusic 55’s Photobucket album.

I imagined the couple gazing down on the Little Town with the night sky behind them. Their trip probably looked more like this 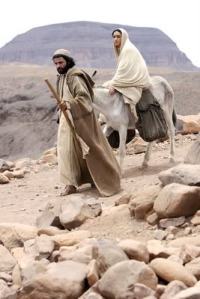 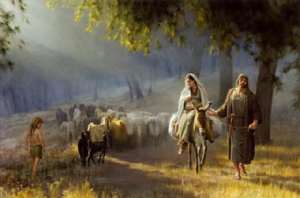 But I liked my gentler version of the trip.

To be able to remember the words of those verses, I imagined the way it happened and told the story.

1And it came to pass in those days, that there went out a decree from Caesar Augustus that all the world should be taxed. (And this taxing was first made when Cyrenius was governor of Syria.) And all went to be taxed, every one into his own city. And Joseph also went up from Galilee, out of the city of Nazareth, into Judaea, unto the city of David, which is called Bethlehem; (because he was of the house and lineage of David:) To be taxed with Mary his espoused wife, being great with child.

And so it was, that, while they were there, the days were accomplished that she should be delivered. And she brought forth her firstborn son, and wrapped him in swaddling clothes, and laid him in a manger; because there was no room for them in the inn.

And there were in the same country shepherds abiding in the field, keeping watch over their flock by night. And, lo, the angel of the Lord came upon them, and the glory of the Lord shone round about them: and they were sore afraid.

And the angel said unto them, Fear not: for, behold, I bring you good tidings of great joy, which shall be to all people. For unto you is born this day in the city of David a Saviour, which is Christ the Lord.

And this shall be a sign unto you; Ye shall find the babe wrapped in swaddling clothes, lying in a manger. And suddenly there was with the angel a multitude of the heavenly host praising God, and saying, Glory to God in the highest, and on earth peace, good will toward men.

And it came to pass, as the angels were gone away from them into heaven, the shepherds said one to another, Let us now go even unto Bethlehem, and see this thing which is come to pass, which the Lord hath made known unto us. And they came with haste, and found Mary, and Joseph, and the babe lying in a manger.

And when they had seen it, they made known abroad the saying which was told them concerning this child. And all they that heard it wondered at those things which were told them by the shepherds.

But Mary kept all these things, and pondered them in her heart. And the shepherds returned, glorifying and praising God for all the things that they had heard and seen, as it was told unto them.

If that doesn’t get you in the Christmas Spirit, nothing will. It’s the TRUE Christmas Story. Not Red Rider BB Guns or jingle bells or Santa Claus.

God, the creator of all things, became man so He could walk among us. And save us. This is how it all began.

O holy Child of Bethlehem
Descend to us, we pray
Cast out our sin and enter in
Be born to us today
We hear the Christmas angels
The great glad tidings tell
O come to us, abide with us
Our Lord Emmanuel