Know what I’ve been doing? 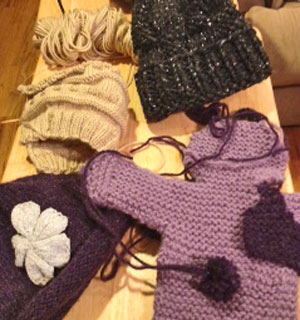 No, not writing. Want to guess again? 🙂 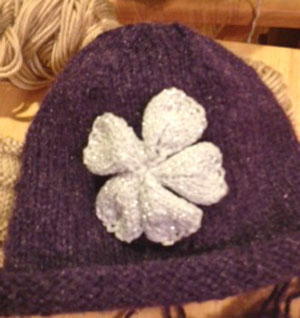 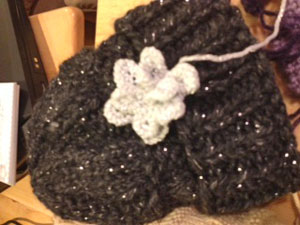 Why so many hats, you ask, when you only have one head? (And yes, I look silly in a hat.)

They aren’t for me. They’re gifts. Here’s where the wild hair comes in. *sigh*

(Here’s the reason I might need to shave my head. No hair, no wild hairs. Get it?) 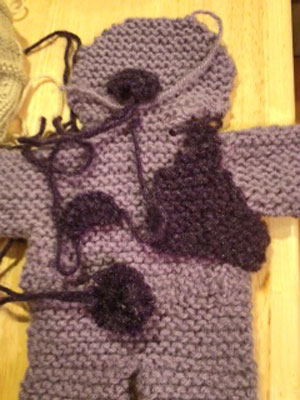 If this one looks like a teddy bear jigsaw puzzle, it is. Hopefully, I’ll get it stuffed and finished before I send it on its way.

They’re all for kiddos I don’t know.

Here’s why I got that crazy hair. I have a little friend who’s going to school near Tahlequah. I snitted and sent her a hat a few weeks ago, and she said all the girls in her house loved it. One even wanted to pet it. LOL.

Why not make one for all the girls in her house? the crazy hair whispered in my ear. 😉 When I started knitting furiously, I realized it was kind of a big bite to take here just before Christmas.

But a wild hair is a wild hair. What’s a mother to do? I’m enlisting a little help. Hopefully, we’ll get this wild hair of mine taken care of before Christmas. 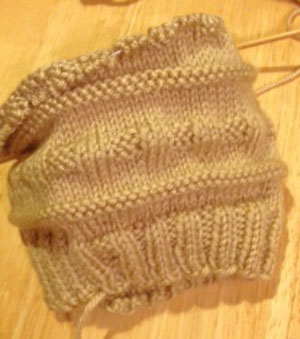 This hat isn’t finished yet. In fact, it’s still on the needles. See at the top? It’s a cable needle (one long contraption with a needle on each end) meant for knitting in the round, except I’m using it like two needles and knitting the hat flat. I’ll seam it when I’m finished.

Leave it to me to use the wrong needles to get what I want. LOL. But it works. I’m getting there.

Did you ever get a wild hair, just when you should be doing something else, such as getting ready for Christmas? Is there anything to do for it except shave your head?

Are your fingers crossed?

Why? I just saw the weather forecast for tomorrow and we have a 70% chance of getting a wintery mix. WOOHOO! I’m really hoping the storm’s path will shift and drop a foot or two of snow on Okie Land.

Did I hear you groan? Stop it! We need snow. 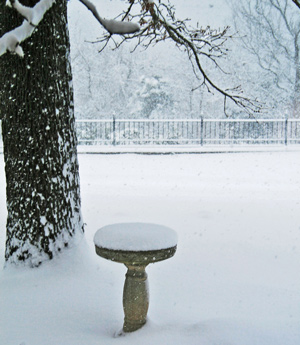 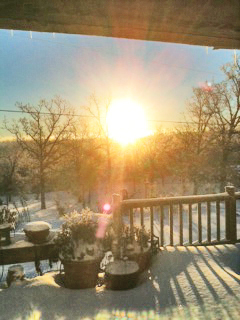 Tons and tons of snow!!! 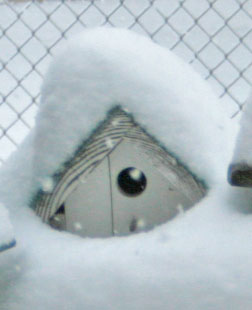 But that’s not the only reason I want it. 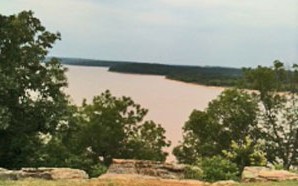 Okay, in some places it’s starting to look like a mud puddle.

But the real reason I want to get snow? Lots of snow. Tons and tons of snow? Enough snow to say I was snowed in?

Because if I were snowed in, I’d have time. (Snow time is so much more fun than regular time, isn’t it?)

Time to write without watching the clock.

Time to snit when I run out of words in my head. 🙂

Time to sit in front of the fireplace and snuggle with my honey.

Time to sit in front of the fireplace and read!

As long as we don’t lose power, I could stand it for oh, I don’t know. Three or four days even!

What would you do if you had time?

I’m a snitter. (Sit+knit=Snit. Right?) I might have  mentioned that a time or two in the past. (Cough.) The thing is, though, I’m a winter snitter. I love to knit with wool during cold weather.

Once in a while, I like to have a project to work on in the summer, too. So the other day while I was in T-Town, I decided to buy yarn to knit a prayer shawl.

I love the idea of knitting prayer shawls for people. In my imagination (which is often so vivid, it gets me into trouble) I can see people I’ve been praying for and with, wrapping up in these shawls as they go to the Lord in prayer.

But when I got to Loops (my favorite knitting store) and started looking through the yarn, even acrylic was too hot for this break-into-a-sweat-at-the-drop-of-a-hat woman to use.

END_OF_DOCUMENT_TOKEN_TO_BE_REPLACED

Running late today, but I wanted to share the progress I’ve made on my Meret Beret. 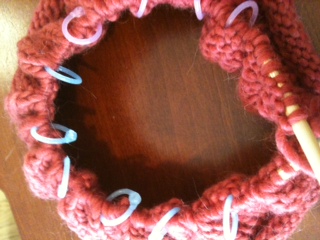 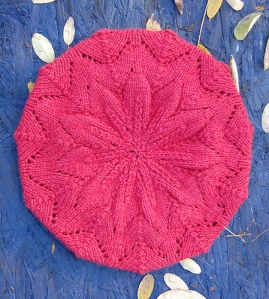 That’s not mine. You can tell because the color is wrong and it’s darn near perfect. Mine won’t be. 🙂 This is a picture I found online to show me what it might look like someday. Well, I’m not there yet. Here’s where I am today. 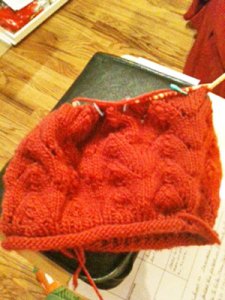 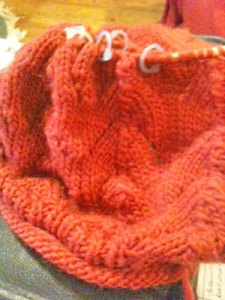 In case you’re wondering, that’s my Bible it’s lying on. (I just finished my Bible study for this morning.) And my Bible is lying on my GMC chart for the book I’m currently working on.

I’m such a neat person. Not.

The beret isn’t that complicated, so why am I so slow? Besides time restraints (I hate that excuse, but there you go.) I Christmassed and knitting a cat scarf. (Except for sewing on the head, it’s finished. Yay!) And a pair of fingerless gloves. 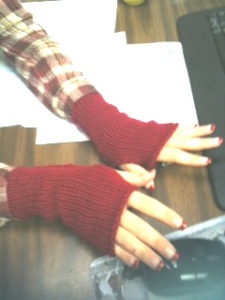 While I found the above pictures, I found a couple of other things I finished this year. I just have to share. 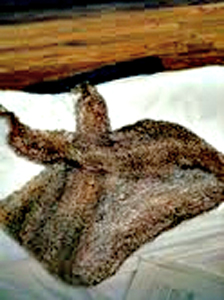 This great little scarf (I still need to block it, I guess, because I haven’t worn it.) and my chicken. I call her Shake a Tail Feather.

I learned to knit when I was in junior high. For some reason, I really wanted to learn, even though no one around me knitted at all. Maybe it was seeing Aunt Sally here on a Christmas visit one year, knit throws for her family. Or it could have been seeing people knit on TV and in movies.

Anyway, I bought a book and “taught” myself. It’s really hard to learn to knit (especially casting on) from a book. While the pictures and arrows look as if they’re going one direction, they’re really meant to be going another way altogether. But I persevered.

I discovered how useful knitting was in high school when I was in a one-act play called the Legacy. It was a period piece, set in the 1800’s. I used knitting as busy work during the play.

By the time we quit doing the play for competition, my square I was knitting was really lopsided, because when I’d pick up my knitting to work, I just started knitting. I didn’t look to see whether I had it forward or backward. 🙂

I’ve taken several classes and found I love knitting along side other people. One of my favorite things about knitting is teaching others. Some pick it up so easily, you’d think they’d learned it somewhere before.

For others, it’s not quite as easy.

Now Omega (kid #6 in the Spess family line up) was determined to learn. She’s in a wheelchair, her hands don’t work as easily as they once did and she can’t drive herself to go to the yarn store, but she was bound she would learn how. So I taught her, and she caught on so quickly I felt as if I’d been a really  slooooow learner.

She even knitted one of the Christmas presents she gave away this year. How cool is that? 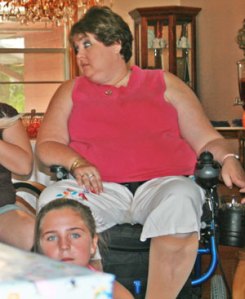 This isn’t the best picture of Omega I could find, but I usually try not to capture her wheelchair, because it’s not who she is. I wanted you to be able to see it today.

I wanted to warn you, when Omega decides she’s going to do something, look out!

No telling what she’ll be doing next.

We have a little problem at work. Some of us are hot much of the time.   The rest, well, they aren’t. (We’re not discussing age here. Or weight. So just don’t do there. All right?)

So one day, Mendy says, “Can you knit fingerless gloves?”

Can I? 🙂 (Is there an emoticon that looks like an eyebrow wiggle?)

Ask an ice cream addict if they can eat a gallon of the cold stuff.

Ask a carnavore if he wants a T-Bone.

Ask a fish if he wants to go for a swim.

What do you do if you were asked to do something you enjoy to pieces?

I didn’t have a pattern, but I’d just seen a pair made on TV (Knitty Gritty) that morning. I cast on twenty-five stitches, long tail. 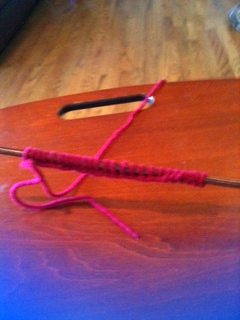 Then I started my favorite kind of knitting. If you’re a knitter, you know what I’m talking about. The kind where you knit going one way and pearl going the other. Never have to count. Rarely have to rip. 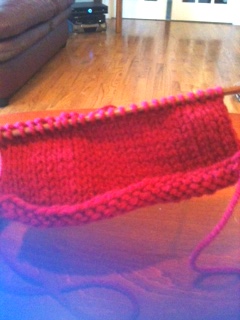 Mindless knitting. Zombie knitting. TV knitting. No remembering to wrap or count or knit two together. Just working away. Whatever you want to call it, I love doing it. 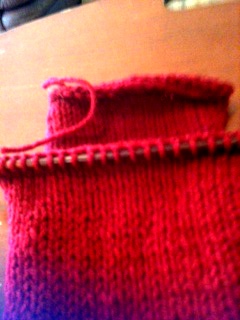 So I’m knitting away with this delicious yarn, watching TV and I finish one. Oops. Well, that was fast.

Then, Saturday afternoon we watched two (2!) football games (I’m not the worlds biggest football fan unless I have nephews playing) so I knit, knit, knit.

And guess what? (You ready for this?) 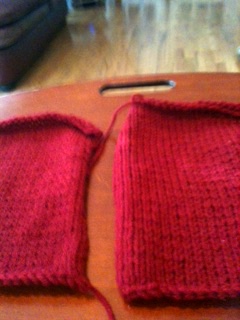 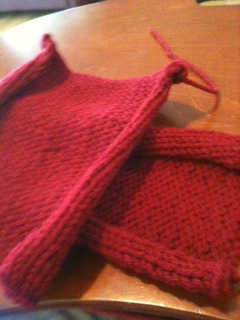 What do you mean it’s only two little squares? Are you saying anybody could knit them in two days?

Actually, it’s two RECTANGLES. Not squares. But it’s true, anybody could have knit them who wanted to. But there’s something else I do when I knit for someone. 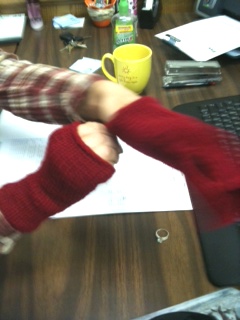 I pray for them as I work.

If I put a tag on things I knit for other people (I don’t) it would say, “A PRAYER FOR YOU IN EVERY STITCH.” But I don’t sew in tags. I can barely make the recs into tubes to slip over her hands. I have no idea how I would attach tags. 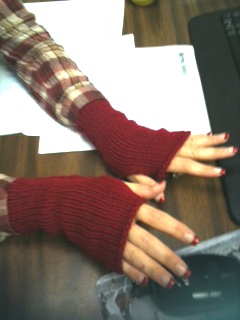 If I had it to do over, I’d buy an elastic yarn to make them. (Maybe.) I might even sew on a little bling when I got finished.

And I’ll definitely take a class to learn how to put things together. (Close the seam.) 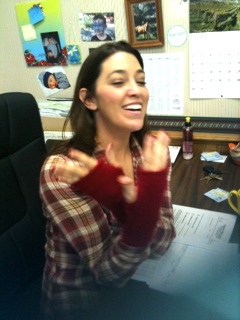 But my friend was thrilled with them, so I’m thrilled.

In case you’re wondering, I did teach her how to knit, but with two little boys, she doesn’t have time.

(I’m not sure she watches football at all.)