Ever been to Philadelphia? It wasn’t on my Bucket List of Places I Want to See Before I Die, but we flew out there last month for G-Man’s birthday, and we had a great time!

He’s a fan of R & B music and a couple of his favorite groups were playing in Collingswood, New Jersey. We stayed in Philadelphia, because Collingswood is just across the river.

Our plane left early, early in the morning, so we had peanuts for breakfast. But lunch! We made up for missing breakfast at lunch. 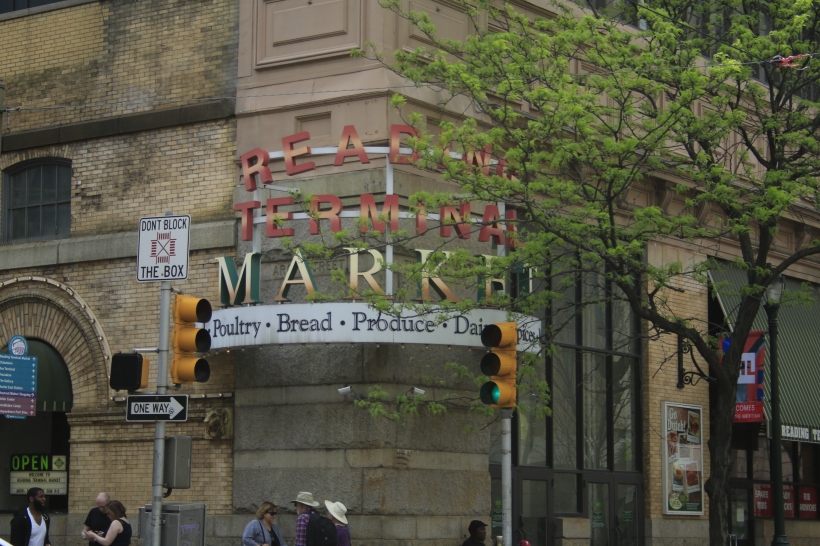 This building is full of restaurants–kind of like a giant food court! Naturally, for our first meal in Philadelphia, we wanted Phily Cheese Steak Sandwiches, and we stood in two lines to get ours.

I ordered mine with hot peppers, G-Man got his with mild. Sadly, people in Philadelphia don’t know what hot peppers taste like. 😉 Very mild peppers.

It was an interesting and entertaining experience! A man with two large spatulas worked over a huge grill making the sammies. He used the edge of both spatulas to chop, chop, chop that meat. Occasionally he’d toss in a few onions and peppers, then chop, chop, chop some more!

When he deemed the beef ready, he took a bun (looked like a hoagie to me) with cheese in it, put it face down on the meat and after a few moments flipped it all the other way, wrapped it up and handed it over.

Next we decided to walk to Betsy Ross’s house. The walk was almost as interesting as Betsy herself.

This was on a wall along the way. It says, “The Pennsylvania Horticultural Society. Improving the quality of life and creating community through horticulture.” Beautiful, isn’t it? Across the street from the gorgeous wall was a rack of bicycles.

These bikes aren’t free to ride. You pay so much per month (or per ride) to use them. I didn’t see a lot of people on them, but I thought they were fascinating. You can read more about Indego here in case you’re planning to go to Phily and love biking.

The really interesting part of the walk, though? Guess.

If you guessed China Town, you were right! The place is wonderful! 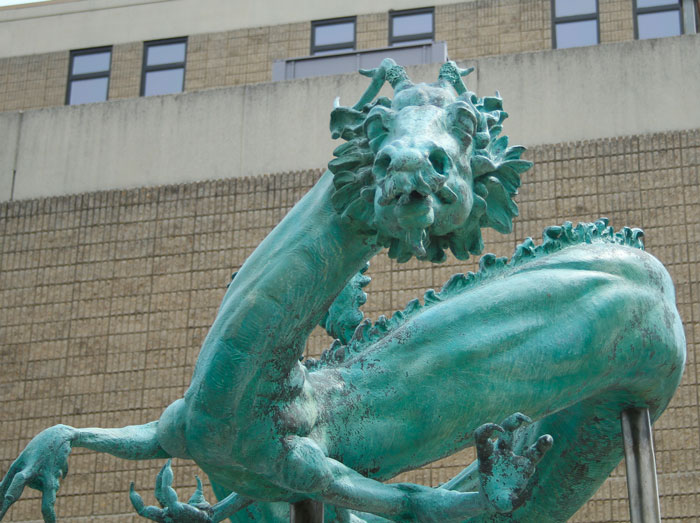 This guy protected a private parking lot. Isn’t he beautiful? He had a buddy, too. 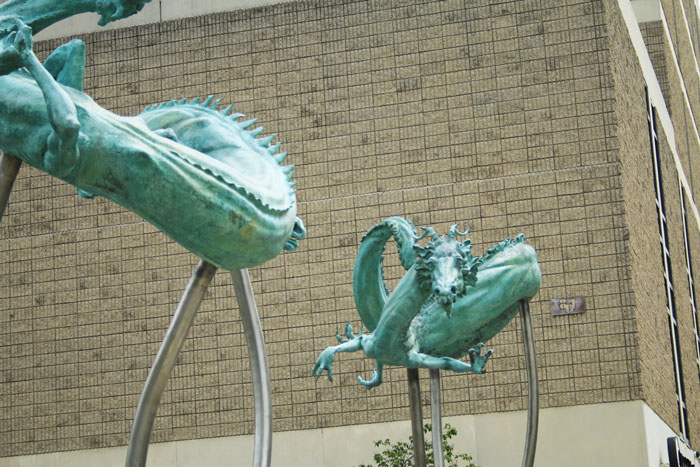 I loved those guys! If I could have fit him in my suitcase, I’d have one in the backyard right now. (Probably would have had to pay the airlines extra for the weight, though.) 🙂

We walked a little longer. We passed lots of Chinese restaurants, Sushi Restaurants and gift shops. One alley, though, stopped me in my tracks.

Can you tell what that is? In an alley, right next to a very busy street, this black Chevy pickup was parked. The bed of the truck is covered and there’s something drying there. I’m fairly sure that’s fish, drying in the open air. People walking, cars driving by and birds flying overhead. I’m not sure what they’re going to do with it, but it was still there when we went back to the hotel.

It doesn’t get stolen.

Every now and then, interspersed among the parking meters, they had one of these. Pretty, isn’t it? I didn’t see one in use, but I assume it’s for locking up bikes. Maybe? Guess I should have asked.

One more thing I saw that amazed was this.

Isn’t that a cool sign? The Hoopskirt Factory wasn’t there anymore, sadly. Just shops. But I’d love to have visited.

Next time, I’ll take you to visit Betsy. She’s quite a woman.

Have you been to Philadelphia?

Have you ridden a blue bike there?

Do you know what that was drying on the back of the pickup?