My sweet niece, Hope, mentioned the other day that I haven’t blogged lately. (Hiya, Hope!)

I told her that I’d run out of words. How sad is that? A writer without words is like an artist without his medium, a swimmer without water or a musician without music. Pretty darn bad.

Just to be honest, everything I thought about writing was b-o-r-I-n-g. And who wants to be boring???

But I refilled my well last week!

G-Man and I went to Durango, Colorado, then on to the Grand Canyon. Except for the fact that there’s a long fall right in front of everything beautiful out that way, we had a great time!

The first day in Durango, we went to Mesa Verde. Ever been there? We have a few times, and each time it’s magical. Or spooky. Or both!

This is the view on the way up, through the windshield. Yep, those are bug guts you’re looking at. Sorry about that. I washed the windshield each time we got gas, but those bugs were determined to die there.

When I washed it once, a Mexican man who’d taken my space’s squeegee to help his wife clean their windows, brought his back. (I swiped one from the next aisle over.) When he did, he said, “My wife said, ‘These dratted insects.’ But I answered her, ‘At least they’re legal dratted insects.'” And he laughed.

I wasn’t exactly sure what he said (heavy accent on his part and poor hearing on mine) so I laughed with him. He was very nice!

So, back to Mesa Verde. The first thing did when we got there was to go to their main building. What’s it called? Wait, I know. The Visitors’ Center. (Duh) Anyway, we went there to get my visit-all-the-national-parks-book stamped. Since my joints aren’t quite up to long hikes and climbs, we didn’t pay to go on one of the regular tours.

We opted for the self-guided ones instead. 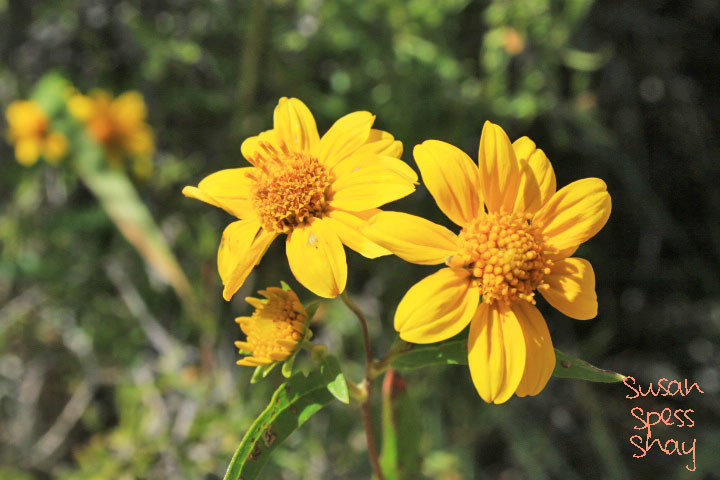 The wildflowers were beautiful. And we saw lots of wildlife–squirrels, chipmunks, lizards and even a bear! We were in the car when we saw fuzzy boy, thank heavens! I’m not sure I’d have thought it was so wonderful if we’d met him face to face.

We found our way to the “Step House,” so called because they found some ancient steps there. (I couldn’t see them, but they were there.) 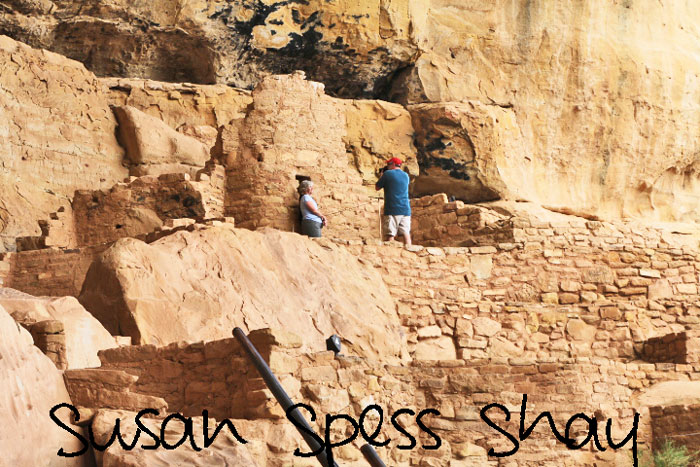 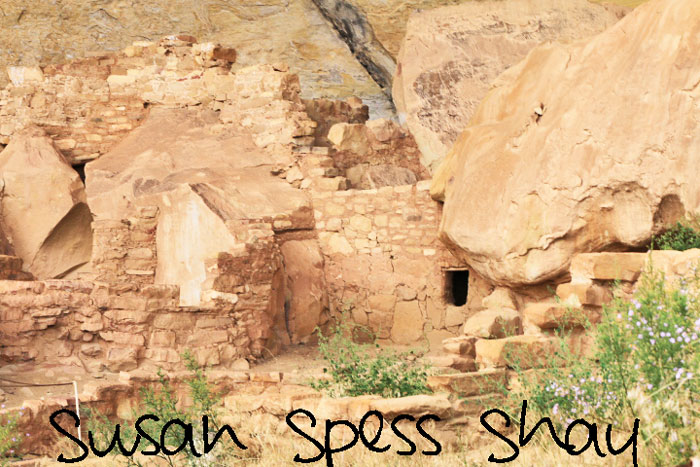 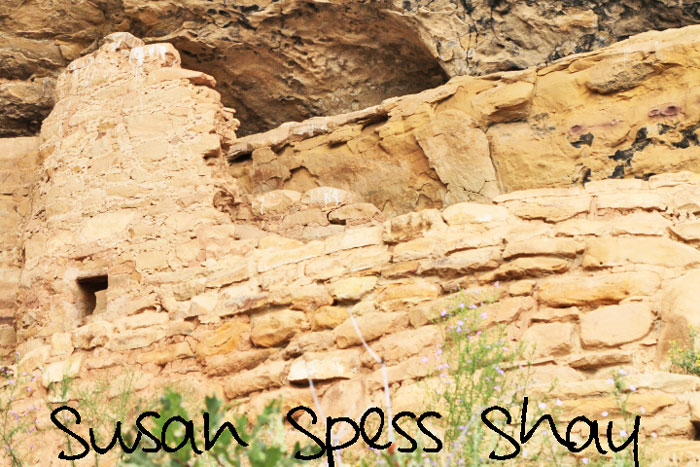 I wish I could show you the valley floor those people had to travel down to get where they were going to build their houses. I whined just walking on the paved path.

The best thing about the trip was the nice people every place we went! We chatted a little with another couple while we were there. (She was from up north. He was from Durango and looked like a young Sam Elliott. 😀 ) They were very nice. You could tell he did a lot of hiking/climbing/etc. She was more like me–afraid of heights and not used to the thin air. 🙂

I’ll admit, I whined some, but I made it back to the car without having to be carried. (I did mention Gary giving me a piggy back a time or two. He didn’t jump at that idea.)

Reminded me of a book I started a long time ago about some people who camped out in a cliff dweller’s hut. I think I needed to spend more time in Mesa Verde, just sitting inside the house and communing with the ghosts living there.

But there was a park ranger guarding the place, and I really wouldn’t want to mess anything up. We could have spent our entire time away at Mesa Verde and still not seen all of it. Those park rangers have fantastic jobs!

If you want to learn more about Mesa Verde, check this out–

7 thoughts on “We Filled the Well!”