Allene, this one’s for you!

That’s really a copy-machine copy of a picture, so it’s not very good, but it’s the best I’ve got. And really, I’m lucky to have it.

Joe was my Grandmother Ruby’s Granddad, which makes him my great-great-granddad. (Is that cool or what?) His name was Josephus (really!) C. Mitchell, and he was born in North Carolina.

I don’t believe Joe came to Oklahoma for the opening of the Cherokee Strip, at least he didn’t get land in the rush. But not long afterward, he owned a saw mill and cotton gin in the Basin–in the spot where the house was that my parents lived in when I was born.

They always called it Aunt Sarah’s house. Now I know why. (Being his step-mother, Granddad Mitchell called her “Aunt” instead of mother.) 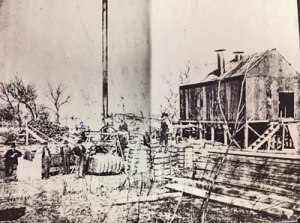 This picture has stacks of lumber and bales of cotton as well as several people standing around. (The man in the black hat is standing on a bale of cotton.) 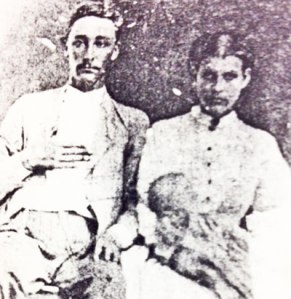 This is another picture of great and great great. The baby is my g-granddad.

The woman is Josephus’s first wife (and my g-g-grandmother) Mary. (Looks irritated, doesn’t she? I might have had that look a time or two in my life.)

Mary died at the age of 30 in West Plains, after having three children. The oldest was six, the youngest two, so old Joe remarried. 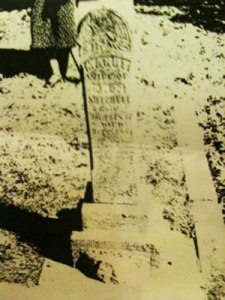 This is Mary’s headstone. The note that came with the picture says that Mary’s son, G-Granddad N. S., quarried the stone himself. Since Granddad was only about six when she died, he must have done it some years later.

This is Sarah, Joe’s second wife. He married her eight months after Mary died, while they were still in Missouri. She was 17 years younger than him. She and Joe would go on to have twelve children together. (They named one Okla Homer. Don’t you love it?)

Some of the children died at birth or soon after, and at least two died by the time they were three. Hurts your heart to think about, doesn’t it?

After 21 years of marriage to Sarah, Joe died. Sarah married a man named Johnson and had yet another child. (She was one busy woman!)

Being Terminally Curious, I really wish I knew the story behind their lives. How did they happen to come to the Mannford area? How and why did Joe die? How did Sarah feel when Joe died, leaving her with all those children to raise?

Did Joe make his wives happy? Or were they too busy keeping all those kids fed to notice?

Sarah’s two youngest were five and two when their daddy died. The two-year-old, Jimmie, would die the next year. Doesn’t that just break your heart?

The first time I heard of Joe, I read about him in a book called Cherokee Strip Fever  by Zola Sample. She only mentions him in passing as the store owner in the Basin, but it was a thrill to see my family mentioned in that book.

I think I’ll have to read it again one of these days. 🙂

Did you ever wish you were Irish? I have. Beautiful complexion, red hair, great coloring and a wonderful accent. What’s not to love?
After doing some family tree research, I’ve learned that I might be a wee bit Irish. (At least the kissing part. As in, Kiss me, I’m Irish.)
Actually, I think I’m the melting pot of the world. I’m German, French, English, Scottish, Irish, southern and Oklahoman. To be honest, that doesn’t matter much. What really matters is that I’m an AMERICAN and a Christian.
In honor of St. Paddy’s day, I’m reposting last year’s.
So . . . did you ever wish you were Irish? What are you? (I’m hoping for at least one outer-space alien.) 🙂 St. Patrick DID NOT drive all the snakes from Ireland. (Gasp!) There are no…

When I tell you we live the wild life in our office, I mean The. Wild. Life. Is this normal or do things like this happen everywhere?

I went in the storeroom at work the other day to get a container of cranberry juice. We’re big juice drinkers at my POE (place of employment) and we buy the stuff in big super-thirsty-giant-sized bottles. (About a gallon in each.)

So I pulled a jug off the shelf, and out popped a huge, furry creature.

It hopped down and scurried across the floor, flashing his furry tail at me.

I was still yodeling so loud, my son, whose office is in the very opposite end of the building, heard me and came running. My heart raced faster than the squirrel’s furry little feet carried him, and it was half-an-hour before I could actually breathe again.

The squirrel disappeared among the boxes of files we have stored back there. (Thank you, Jesus!)

But he really liked the area where we keep the juice, because the next time I walked into the room (I forgot he was there) he jumped down, sending me into a screeching fit while I danced out of the room.

Squirrels don’t bother me when we’re outside where there’s lots of room (for me to escape) or I’m in the car and they’re playing kamikaze in the street, but when I’m in a small-ish room with the sharp toothed little devils, I’m a Pure-Dee Chicken.

Pure. Dee. (Not sure exactly what that means, but I was.)

So . . . Wonder Son, Wonder Niece and her three year old son closed themselves in with the furry-tailed tormentor and attempted to capture it.

I hear there’s a video of the squirrelly party, but I haven’t seen it. They tell me fur-boy circled the room again and again. He ran across toes, jumped over heads and terrorized more than just me.

All I could hear from the kitchen (where I  waiting) was thumping and shouting, but no painful shrieks, so I figured they hadn’t been nipped. Yet.

After another safari or two by employees, we gave up and begged Cousin Rick to bring his humane trap, which he did.

For scaring me so badly, I reserved the right to smack the critter after he was caught, but once he was in the cage,

he was smaller (I think he shrunk. I really do.) and not nearly as monster-like.

Besides, I didn’t want to get that close. (Wonder Niece took the close up. NOT ME!)

On the up side, we’ve only had one bat sighting this year, and I wasn’t there for it. 🙂

Does anyone else have these close encounters with Wild Life or is it just us?

From FBF and almost relative, Larry Lawrence. Thanks, Larry! Love it.

I saw this on Facebook and shared it there, so if we’re friends (and it we aren’t, WHY NOT???) this is a rerun. But it’s sooooooo good, I wanted to share it here, too. 🙂

I dare you to listen to it and not boogie. (Or at least tap your foot.)

But don’t forget to come back. 🙂

Isn’t that just the coolest? I love happy, upbeat songs! And red convertibles. And dancing people!

Get this–one of my friends from high school said her choir will be performing that very song in May! I mean, cool or what? (I need to be there.)

How do you get along with Daylight Savings Time?

After a couple of days, dragging myself (not springing, for sure!) out of bed, to the kitchen and my ‘puter, I’ve found something I like.

My sleep is messed up right now. I woke this morning at three o’clock, read a little (thank you, Elmore Leonard–OUT OF SIGHT is great!) and drifted off again.

That’s when I had this weird dream that G-Man and I were renewing our vows in an old-home-turned-wedding-venue right here in C-Town.

My gown was stunning! White, full skirt (lots of layers) with a black portion running across the shoulders and down the sleeves. I mean, it was straight out of Vogue-In-My-Mind!

I was so disappointed when G-Man showed up (yes, he was really going to marry me again!) wearing a tan Polo shirt and slacks. 😦

He shrugged and showed me his dimple. “I didn’t want to wear one.”

About that time, I discovered I’d forgotten to take along a certain piece of my underclothes.

Our youngest boy, all grown up and married like he is today, ran around the venue, past the guests, servers, florists, photographers and everyone, yelling, “Mama forgot her ***! Mama forgot her ***!” He was wild and sweet and innocent just like he when he was little. He filled me with joy!

I also dreamed up a couple of daughters (I have no daughters) who weren’t nearly as cute as my sons. One made me mad, so I chased her. (Yes, I was wearing my wedding gown.) 😉

G-Man woke me just in time to save her. (Isn’t that just like a dad?)

I woke up, remembering the dream and laughed out loud! Believe me, giggles when I wake are rare! (Like, never.)

If I can get up each morning for the next eight or so months with a smile or a chuckle, DST will get a big thumbs up from me!

How about you? Do you like DST or no?