Ever wonder where writers get the ideas for their books? Just about everyone I talk to who’s the least bit curious about writing wants to know. (Sometimes guys want to know if I’m writing about them. Go figure.)

“Why a werewolf?” people ask. “How’d you think of something like that?” and “Where did that book come from?”

First I need to tell you a little bit I’ve learned about publishing. (Admittedly, not a whole lot. 🙂 )

Most of us (well, SOME of us anyway) would like to be published by one of the Big Six or the Big Four or however many whoop-ta-doo big time New York publishers there are this week. Why? Well, their name is behind you, their publicity department is supporting you, and you get the respect of your fellow writers. Sometimes.

So hoping to break in, we try to figure out what they want. What is it? Usually, they point at a book that’s gone to #1 on the best seller lists and say, “We want something exactly like that . . . only different.”

All righty, then. I try to keep it in mind when I’m deciding on a new project.

Back to where I got the idea for MAKE ME HOWL.

No, I’m not saying Marilyn’s snappish. Not one bit! And I’m not saying she can shift to a wild woman at the drop of a growl. (Although it might be possible . . . )

What happened is she let me read the first chapter of a trilogy she considered writing about three witchy sisters. I LOVED it. The story was sharp, smart, fast paced, funny and FUN!

Naturally I thought, “I want to write something exactly like that. Only different!”

Something fun, exciting and funny. I wanted to write characters I would enjoy being with everyday. A story about something readers would think they know about, but I wanted to give it a twist.

And a strong heroine.

About that time, I remembered one of my favorite movies when I was a kid. I often went to the Melba Theater with Sister Debbie and Marsha Hagberg and one Saturday we watched “The Wolf Man”. (Part of the time we watched through splayed fingers.)

Oh, yeah. That was the direction I wanted to go. A werewolf, but I wanted to make it different. 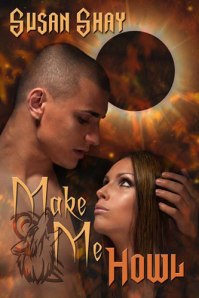