When I was a baby, Mom’s Uncle Henry gave me a puppy named Mike. I’m not sure who named him Mike (I really was a baby) but he was the best dog ever! One of those pets that you just think about and a smile starts way down deep inside you and doesn’t stop until your mouth stretches in a big old smile. He was the best!

We don’t have many pictures of Mike. (My family didn’t often waste film on dogs) but we have this one, courtesy of my cousins’ mom. 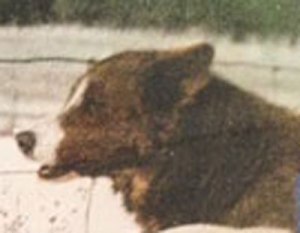 This is Mike. He didn’t have white on his face, and I’m not sure why this picture looks like he did. It might be snow or maybe it’s the way the light hit his face and that old film.

Anyway, we lived on the farm in the Basin outside of Old Ford when we got him. He lived there with us, and when we moved into town where we lived with Grandmother and Granddad, he stayed at the farm. (The house in town was on the highway, so farm life was much safer.)

Mike did come to town every now and then. Once, when Dad went out and got the tractor to do something at the house, Mike followed him into town. Debbie and I were so excited to see him, even though we’d probably been out to see him just a few days before that.

Anyway, Mike lived on the farm where Uncle Frank and Uncle Paul and their families lived. Both families fed him. It’s a wonder he wasn’t fat, fat, fat, but he was too busy to get fat. Whatever was going on, Mike was in the midst of it. 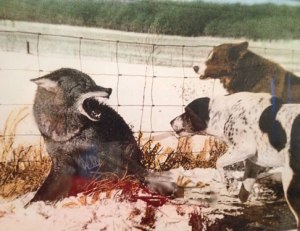 Wilma Spess won an award with this picture.

This is a picture of a picture. I snapped it through the glass to share with you. The red on the coyote is my shirt, reflecting in the glass. (Sorry!)

For some reason, this coyote had been prowling close to Uncle Paul’s house, snacking on UP’s chickens. My uncle decided he needed to do something about it, and took the dogs to go after him.

BTW: So you don’t think too harshly of us, in Okie-Land there used to be a bounty on coyotes.

The coyote has turned on the dogs here, ready to do battle. It’s not a fill-you-with-glee picture, is it? So why did I share it?

Because Wilma took a great picture. (Wish you could see the original.)

Because I wanted you to meet my dog, Mike. 🙂

And because I wanted you to see how gorgeous the coyote is.

I’ll bet nobody had to make him howl! 🙂