Many of the places I’d love to see are east of Okie World. I’ve driven past many of those places, but didn’t actually stop. Why???

Once upon a time, back in the dark ages when G-Man and I only had one child, we flew to Rhode Island, because we were going to “bobtail” a truck back to Oklahoma.

Do you know how long it takes to get to Rhode Island from Okie Land?

Just the flight to New York City seemed like a thousand years, but then to get to RI, we had to take a “puddle jumper.” Ever been in a puddle jumper? Well, there’s room for about 16 people, including the pilot. Okay, maybe 30, but not many more. It’s one seat on one side of the aisle and two on the other. Or maybe it was just one on each side of the aisle. But the plane was so small, they couldn’t close the door to the pilots’ seats.

To be very honest, I don’t remember, exactly. (I’ve tried to delete the memory from my mind.)

After we leapt over a couple of puddles, we made it to Rhode Island and the place where we were to pick up the truck we were buying. I wrestled our single suitcase into the cab, scaled the monster (I was afraid I’d need a ladder to get in) and planted myself in the bench seat to wait for G-Man while he finished up inside. 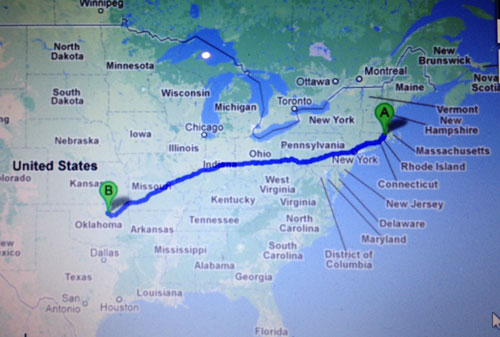 This map is kind of small, but it shows where we went. Rhode Island is A. It’s one of those little states up there by America’s nose. 😉 C-Town is B.

According to Google Maps, it’s 1556 miles from RI to OK, and should take 23 hours to drive. Took us three days.

Why did it take so long, you ask?

It started with us going right through NYC, through the tunnels and over the bridges you see on TV in the cop shows instead of trucking it through White Plains. After that we were on the New Jersey Turnpike. Wall-to-wall vehicles, five o’clock in the afternoon (or there about) and it gridlocked. Shutdown. Nobody moved faster than about one mile an hour.

And I needed to potty. (Yeah, TMI. I know. But I still remember the pain after all these years!)

I know at least one person reading this has at some time ridden in the cab of a big rig and not had a trailer on behind. That’s bobtailing. And it’s ROUGH. Too rough to read, to rough to knit, and too loud to talk. Much. LOL.

Turned out, I was pregnant at the time, but didn’t know it yet. (Surprise!)

We spent the first night in New Jersey. If you look on the map, it’s practically next door to Rhode Island, but the universe had time to expand in that long day!

Did I mention it was winter? Snow covered the ground, and we saw several wrecks. When one of the wrecks included a big rig, it was usually on its side, the trailer broken open long ways and whatever it hauled was spilled out all over the road.

We made it all the way through Pennsylvania, where a lot of those places on my bucket list are.  That’s where America’s first capital was. Our forefathers signed the Declaration of Independence there. Betsy Ross lived in that neighborhood. Valley Forge is somewhere around there. (Isn’t it?) And I think Washington’s famous crossing of the Delaware was around there.

Old Bedford Village is there. (I wanted to stop at Old Bedford so badly on that trip. And not just for the bathroom!)

American Bandstand and Dick Clark were there!!! Philadelphia is where so many of the great singing groups from the ’50’s got their start.

I think I’m moving Pennsylvania to the top of my Bucket List. 🙂

BTW: We finally did make it home, but I’ve never again volunteered to go with G-Man to bobtail a truck anywhere. And I doubt I ever would . . . unless he asked me. 🙂