I have a theory about God. I don’t have a scripture to back it up, and if I told it to one of the Bible scholars in my life, they’d probably laugh at me.

To be very honest, though, I think I’m right.

Here it is: I believe that from time to time, God looks at us and says, “Have I told you lately how much I love you?” And since we can’t actually hear God (most of the time) He shows us.

On our way home from my aunt’s funeral the other day, He did just that.

We stayed all night at Raton, New Mexico. I wasn’t particularly happy with the hotel we stayed in, so I was more than ready to head home. But I noticed a big patch of thistles growing behind the hotel.

Thistle patches aren’t something we see very often, and they were pretty, so I wandered around there with my camera.

I’ve accidentally grown thistles under my bird feeders, but mine are kind of spindly and unloved. These were beautiful.

So I snapped away 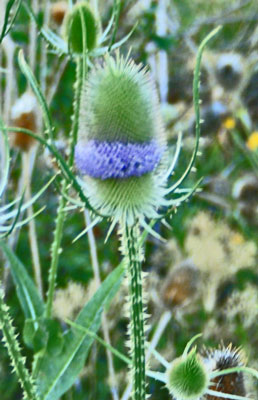 and then I noticed something at the bottom of the hill. 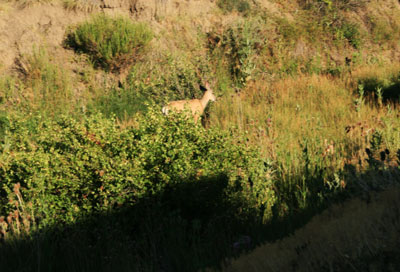 Not just a deer. A buck! 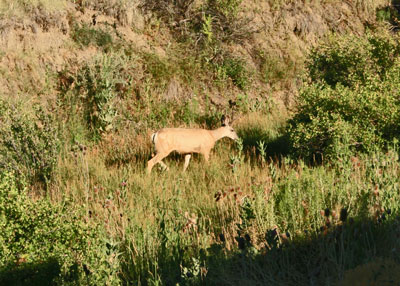 He noticed me about the same time I saw him. Either he was too hungry to care I was there

or he was used to having his picture taken. Kind of looks like he’s posing here, doesn’t it? 🙂 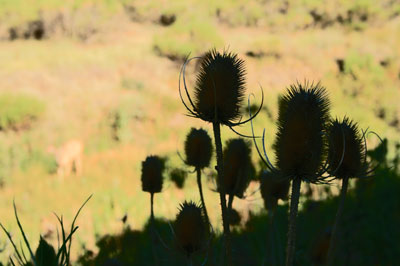 I shot him, he watched me, and ate. I’m convinced that little deer was sent from above to remind me of God’s love.

If I could get down that hill without tumbling, how close would he let me come? Was he someone’s pet? Had God tamed him enough that I could touch him?

But G-Man and Sister Debbie were waiting for me, and I was a little ambivilent about trekking down that hill.

Then something happened. A sign that the little buck was finished posing and our time together was over. 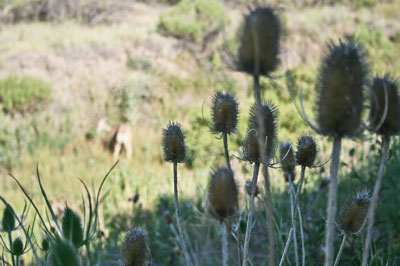