Seems as if this was my first weekend at home in forever! When did summers get to be so busy?

We had a couple of uninvited guests run into the house Saturday morning.

There were three to be exact. Isn’t he cute? I love the purple tail. 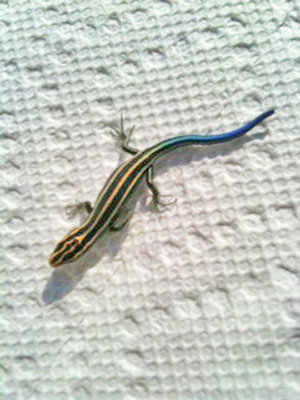 I caught him with a paper towel and took his back outside. He wasn’t more than an inch-and-a-half long, and he was so light, when the paper towel blew in the breeze, it lifted him right off the ground. He held on tight though. 🙂

Another one ran inside and, when I tried to catch him, right down the air vent. I just hope he can find his way back out.

Remember this guy? I’ve decided he’s not a real sunflower (the bloom is too small) but I’m still having fun watching him grow. G-Man says it looks more like a sun-tree than a sunflower, and he might be right. 🙂

He peeked at me last week.

And now he has that eye open.

I had to shoot up to get the bloom.

The center almost looks like a heart, doesn’t it? I couldn’t resist playing with it just a little.

What do you think? (I used Photoshop Elements to make the change.) Almost looks as if God made it that way, doesn’t it?

Sunday we celebrated Father’s Day three times. Once in church (where every day is God the Father’s Day) once at Sister Debbie’s house (she makes Chicken and Poodles that taste like Grandmother’s did) and the third time with our boys at Johnny Carinos.

Want to know the best part of family get-togethers (including my church family) for me? The joy, laughter and having time just to be with each other.

Warms the heart, doesn’t it?

How did you spend Father’s Day?