As I mentioned Monday, George Lindsey went to that Great Gas Station in the sky last weekend. George played Goober, who worked at Wally’s Gas Station on The Andy Griffith Show.

The Andy Griffith Show has lasted as long in reruns as just about any show out there because it’s about the warm and wacky people in a Small Town World . . . just my kind of show! And apparently lots of other people, too.

So to honor Goober, Andy, Barney, Opie, Aunt Bea, Gomer and all the rest–I’m going to share one of my blogs from 2007. 🙂

One day several years ago, I noticed that I’d received my inheritance from my Aunt Betty. I got her butt. Honest, I have an exact replica of my aunt’s hind end.

No, it’s not the pretty kind that’s small and round in just the right spot. It’s shaped more like a ham. A full ham, if you get my drift. So naturally I named my butt Aunt Betty.

How can you keep from joking about a ‘blessing’ like that? If I accidentally bump someone, I tell them Aunt Betty’s getting out of hand, that sort of thing.

Recently I noticed, Aunt Betty’s trying to take over the world, and she’s growing with leaps and bounds. (Sort of moves that way, too.) What did I do about it?

I joined the local gym.

BF Marilyn Pappano got way too much enjoyment out of that. When she stopped laughing and could breathe again she said, “I can’t believe you joined a gym. That would be like Julia Sugarbaker (Designing Women) pumping iron and sweating. I just can’t see it.”

When I told her our gym used to be a church, she laughed even harder. (Maybe Marilyn’s Aunt Betty is small because she keeps laughing it off. At me.) “Is that so when you work out you can pray to survive?”

The first day I put on headphones with a tape from RWA National so I wouldn’t have to listen to myself pant and wheeze, and started out on the treadmill. Five minutes to warm up. Then I headed for the weight machines. 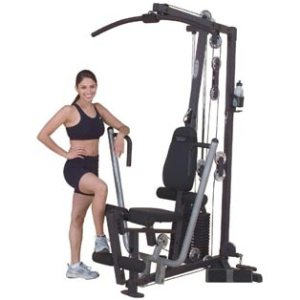 Thankfully no one else was there at the time. I worked my inner thighs and my outter thighs. Then my front thighs. (Who knew they had so many machines for specific areas?)

I did a twisty thing that I think is to whittle my waist. Next I saw an interesting machine with handle bars dangling in front. Not paying too much attention to the actual contraption itself, I straddled the mechanism and dropped onto the seat. Well, I thought I was going to land on the seat, but I missed. (On the right side.)

With a little chuckle, I got up and tried it again. You’re not going to believe it, but I missed, again. (This time on the left side.)

It’s pretty bad when you aren’t smarter than a big chunk of metal. Grabbing the seat with both hands, I carefully sat down in the middle and balanced there.

But I couldn’t make the thing work. I have a “bad” shoulder that the doctor did shrinky dink surgery on–used a laser to shorten the ligament that holds the ball in the joint–so I try not to put too much stress on it.

That machine was too much stress. (That’s my story and I’m sticking to it.) Besides, I got a lot of exercise just trying to get on the silly thing.

When I got off the machine with the dodging seat, I found someone else had come in and was on a treadmill, but I hadn’t heard them because of the headphones.

I just hope she got a lot of enjoyment out of her afternoon.

A few days later, when I could walk again without limping, I went back to the gym/church/torture chamber. This time a friend was there who showed me the ins and outs of the machines. (I’m not a person who can look at a machine and instantly know how it works. Big surprise.)

So we worked out together. Sort of. This woman has been working out for only 2 1/2 weeks. When she’s at the gym, it’s the machines that get the workout. She knows how all of them work and puts them to good use. After lifting weights for an eternity, I was ready to leave, but she tempted me back to the treadmill. (I’d already warmed up on it for 5 minutes before I machined.)

Did I mention I forgot to take a bottle of water? Needless to say, by the time I was through, I needed a drink badly! 🙂

And now I feel wonderful–sore muscles, achy knees and all. I probably wouldn’t need to work out again for a while, except for the fact that Aunt Betty is still hanging in there. Or out there. So I’ll pop back over tonight and at least walk the treadmill.

Even if my friend’s not there to work out with me, I’ll always have Aunt Betty to keep me company.