One of the coolest ways I know of to waste a little time is by looking at old magazines. You get a tiny taste of life as it was at the time of publication.

My dad saved a Time Magazine from the very early ’60’s. I don’t remember why he saved it. Maybe because President Eisenhower is on the cover and there’s a story about him.

Anyway, I glanced through it one day and found this. I loved this car ad–

A cartoon strip. Don’t you love it? 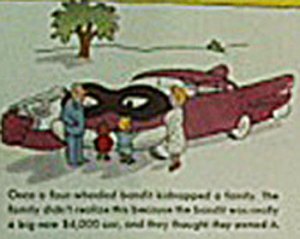 Can you read the caption?

“Once a four-wheeled bandit kidnapped a family.”

It goes on to say the bandit robbed the family of $4000. (That’s what the gas guzzler cost in those days.) Then it talks about holding them for ransom, because it used so much gasoline.

Gasoline cost about eighteen cents a gallon (if that much) at that time.

In this one, nobody in the family can figure where their money is going. Even the little kids are wondering what happened to their banks.

I think this picture is clear enough to read but,

“Finally they realized the bandit’s 10-miles-to-the-gallon appetite, depreciation and other expenses were costing them about $1500 a year. 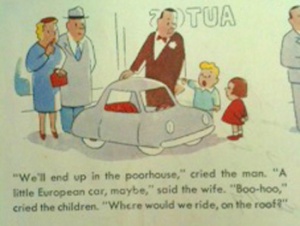 “We’ll end up in the poorhouse,” cried the man. “A little European car, maybe,” said the wife. “Boo-hoo,” cried the children. “Where would we ride, on the roof?”

“Luckily, they heard about Rambler’s superb economy and top resale. They tried it for size. “Why it’s as roomy as our $4000 car,” said the wife.

So they traded the bandit for a Rambler 6 with overdrive. Now the children’s piggy banks keep overflowing. Yours will, too, with Rambler.

Can you see the road sign? It says 1 cent a mile. Cool! 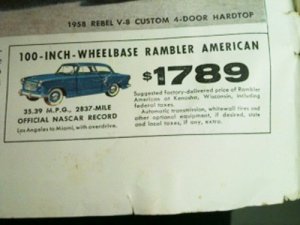 My family never owned a Rambler. I think one of my friend’s grandparents might have, but I’m not sure. Sadly, I don’t believe I ever rode in one.

I found this on Wikipedia–

The first use of the name Rambler for an American made automobile dates to 1897 when Thomas B. Jeffery of Chicago, Illinois and builder of the Rambler bicycle, constructed his first prototype automobile.

I think that $1789 car was way before it’s time. And ads like this should make a comeback. 🙂