When I’m trying to lose a few pounds (or more than a few) weird things happen in my head. I develop cravings for breads and cereals and all the yummy carbs I try to cut back on. I know it’s not true hunger, but I want it just the same.

In honor of my cravings, I’m going to talk about CHICKEN AND POODLES. Okay, it’s really chicken and noodles, but I had to call it something weird when the kids were little. They LOVE them now. (Smothered Steak turned into Smothered Snake in my world.)

Here’s the recipe for homemade noodles, written in Grandmother’s own hand.

I have to warn you, making noodles from scratch isn’t easy. Grandmother didn’t have a machine to roll out or cut the yummers for her. She mixed them by hand and used a rolling pin to flatten them. In case you’re wondering, it’s a very stiff dough and builds muscles to get through preparing them.

Maybe you burn enough calories making them that you can afford to eat them. 🙂 I don’t know because I’ve never done it. I made noodles from scratch one time, and I used a mixer,

a noodle maker thingy that fits on my mixer and cuts the noodles, too. And still it was way too much work.

A package of Reames frozen noodles is much easier and tastes almost as good.

I’ve made chicken and noodles using the dried noodles off the store shelf, and it wasn’t bad. (I made them fairly often when we were first married.) Boil up the noodles, add left over chicken WITHOUT bones and a can of Cream of Chicken soup. Not bad stuff. (I used a tuna casserole recipe and made it taste good.) You can put it in the oven and top with crunchies (chip crumbs or bread crumbs) but I never have.

So here’s how I make good Chicken and Poodles for two.

Cook Reames Noodles in chicken broth. (If you add a couple of the bullion cubes, it makes them even better!) Give them plenty of time to get done. Toss in the chicken, season to taste. Tada! Yummer supper. For some reason, it seems like a long cooking time rather than rushing it makes it better.

BTW: No poodles were harmed when making this meal.

Since I posted Grandmother’s Noodles in the past, which makes Chicken and Poodles a repeat, I’m going to share Smothered Snake. (Yes, this is a rerun, too. Sorry about that. Guess I need find something different to cook, don’t I?)

1 round steak (can be tenderized, but doesn’t have to be)
vegetable oil
1 can Cream of Mushroom Soup
salt and pepper 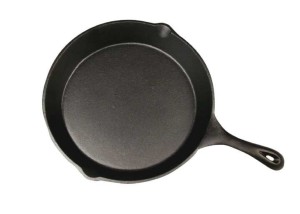 Heat oil in a heavy, oven proof frying pan. (I use a cast iron skillet.) Season steak, brown in pan. When well browned on both sides, remove the steak from the pan and put the soup in. Stir well to loosen all the yummy goodness from the pan and mix it into the soup. Then put the browned steak back in the pan and cover with soup.

Cover and put in a 350 degree oven for one hour. Chow down.

You can thank me later. 🙂