I might have mentioned I come from a Small Town World. 😉

I found this picture online, I didn’t take it. 🙂 It’s shot from the middle of the street, right in front of my office, looking north. Notice, the street in this picture is dirt.

Also notice the street light on the righthand side. I wish we had street lights like that today! They’re gorgeous, too! 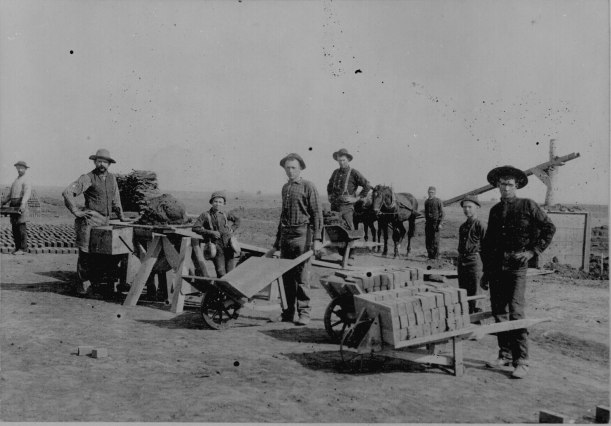 At some point, someone started a brickyard near C-Town on Jobo road. (Not to be confused with Jodebo Road.) This is NOT a picture of that brickyard. This one is near Round Pond. (I have no idea where Round Pond is. But they had COOL wheelbarrows!)

Apparently, having your own brickyard makes bricks fairly inexpensive. So the town fathers decided to pave our streets with . . . you guessed it. Bricks.

I didn’t take this picture, either, but it’s taken from about the same place as the one with the dirt road–the middle of the street in front of my office, looking north. 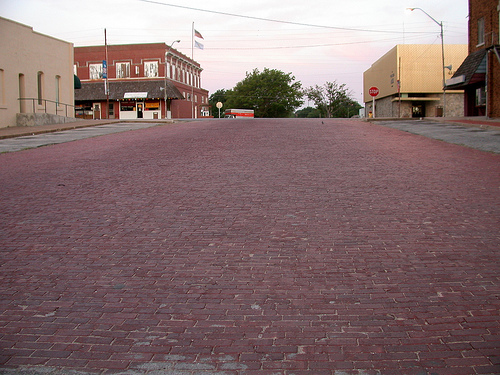 Several of our neighborhood streets are still brick. I love those streets. They aren’t perfect, they’re no fun to roller skate on, and riding a bike on them will loosen your teeth,  but brick streets have a charm you don’t get with tarmac.

Of course, some of the bricks in the streets are cracked, some are broken and some are missing. Some bricks have faded with time and others have been stained by a lot of things I don’t want to know about. But they’re durible, made to last, and strong.

Sadly Broadway, now a state highway, no longer has a brick surface. And under Broadway, we still have the waterline that was laid many, many years ago. That line sometimes has a leak that has to be fixed. 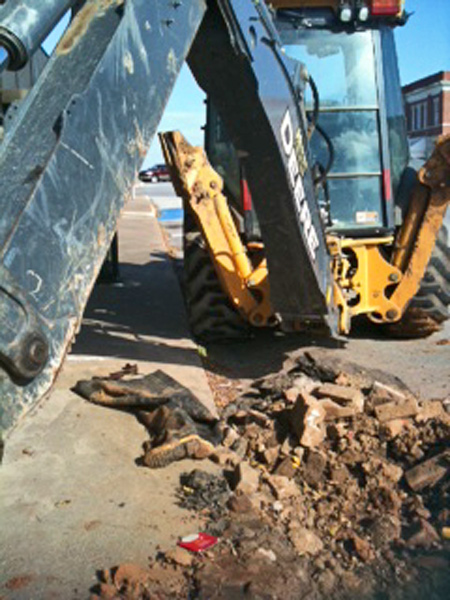 And guess what waits under that street . . .

You guessed it. That beautiful, durible, hard working brick.