On this day when I was ten years old, Aunt Phyllis and Grandmother took me, Sister Deb, Tinny-Woo-Woo and #4 to the fair. Joanie, Phyllis’s daughter, went with us, too.

We had a great time, riding rides and seeing the animals and exhibits. Once in a while Grandmother had to sit down and rest, but most of the day was spent rushing from one ride to another. I don’t remember if we bought lunch or took sandwiches. (If the parents had been along, we definitely would have taken sandwiches. Mom was convinced Fair Food would poison us.)

Mom and Dad didn’t go to the fair, because Mom was having a baby. Our youngest sister was barely fifteen months old. So after a long day at the fair, Aunt Phyllis decided to go past the hospital and see if the baby had been born.

Back in those days, parents didn’t know what sex their babies were going to be, so they had to have two names picked out. Up until that baby–before I was born, Sister Debbie, Tinny and #4–the chosen boy name had always been Christopher Darwin.

I didn’t mind Christopher so much, but the Darwin didn’t float my childish boat. The good thing is, before kid number five was born, they changed the boy to be name to Jeffrey. Much better!

So back to that fair day so very long ago–

I still laugh about that last line.

There were times when he was a kid that I thought it might have been, well, not a mistake but maybe a misstep. But when he stopped crying all the time, I was thrilled to have that brother.

Maybe it’s because he’s a male, but the guy has always seen things a little bit different than the Spess Girls. When we saw a rabbit, we wondered if it had babies. When he saw one, he saw an opportunity to hunt.

A pond or lake was a great place to swim or tan for the sisters, a place for him to fish. Summers were for playing ball and spending time at the pool for the girls, a time for our bro to go to work with Granddad and Dad. 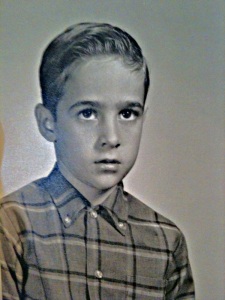 I liked to knit. He liked to use my yarn to tie me up when I fell asleep over my needles.

Later, he taught me to play tennis and loaned me his six gun for a Halloween costume. (After checking twice to make sure it wasn’t loaded.)

And when we got a call one night at the folks house that my house was on fire (G-Man was working) he was the one who went with me. (He made the mistake of thinking I couldn’t drive in an emergency such as that. Snort!)

He finally grew up, went to college, married and had kids of his own. Great kids, who I enjoy practically as much as I enjoy him.

He’s the kind of guy I enjoy talking to, who has a one-on-one relationship with the Lord and isn’t embarrassed to tell you about it.

The day we lost so many family members to a drunk driver, when nearly every person I knew was at the hospital with Omega, Brother Jeffrey saw our car arrive at the hospital and was the one who met us at our car door. He was there, ready to comfort and be comforted.

Remembering with us that, while Mama was no longer with us, she wasn’t lost. We knew exactly where she landed–in the arms of our Lord, telling Him how thrilled she was to see Him face to face.

Some people tolerate their siblings. I’m one of those people who knows how incredibly lucky she is to have the brother and sisters God gave her. Every one is so very special!

Happy birthday, Jeffrey! I’m so glad it wasn’t a mistake!!!