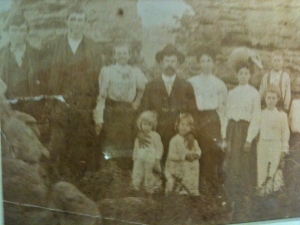 See the two little girls right in the middle? 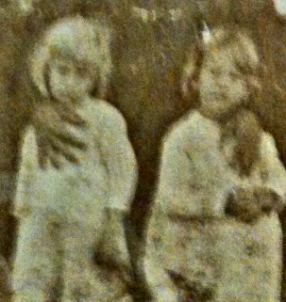 The one on the left is my Grandad Ray. (Edgar Ray Spess.) The girl on the right is his twin sister, May. (I’m not sure what her first name was, but it should have been Edna May Spess.)

The man with the big mustashe and hat, who’s sort of holding the twins in place, is my great-grandfather, Charles Elmo Spess. The woman on his right with her hand on her hip is my great-grandmother, Louise Emma Nicum Spess. Word has it she was a “real pistol.” (Imagine a pistol in this family. Go figure! LOL)

Together, they had a pile of kids–ten. I think there’s even one or two missing from this picture. Here’s where they lived– 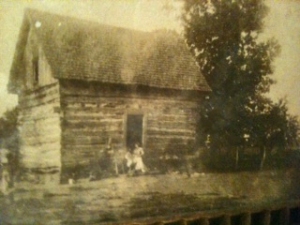 Great-Grandma is standing in front of the house, her left hand on her hip.

After a deep study of this for oh, five minutes or so, I’ve come to the conclusion that the hand-on-her-hip is a genetic condition. See? 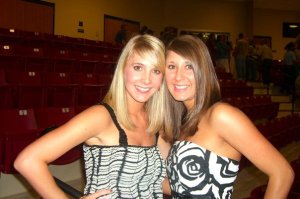 These are two of her beautiful great-great granddaughters. They got hand-on-the-hip gene, too.

Either that or Great-Grandma learned a hundred years or so ago what we’re figuring out today. It’s a very pretty way to stand. 😉 Now look at this:

Oh, my gosh! These two look a lot alike, don’t they? (If I had a picture of Ashley–on the right–when she was about Grandad’s age–on the left–you could really see it.) You’d almost think they were related.

Oh, yeah. They are related. My bad.

Back to the great-grandparents–After a while, Great-Grandad built a one room cabin on the other side of their 160 acres. I don’t know if that was so they wouldn’t have 11 kids or if they just got along better if they weren’t together all the time.

The fireplace and chimney in that one room cabin where Great-Grandad lived alone is still standing near my dad’s house.

Twin Rocks, on Eagle Mountain where the fam pic was taken, is just behind his house and has all kinds of names and dates on it.

Once I found a four letter word on it and a date from the 1800’s. Why would a person go to so much trouble to chisel a bad word in rock? I wondered. Who would love cussing that much?

Then I brushed away some dirt and moss or lichen or something growing there and found the rest of the word. “Mitchell.”  LOL. That was my dad’s mother’s maiden name. 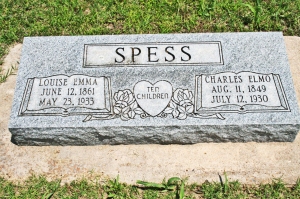 Here’s the great’s headstone. They were originally buried in the East Basin, north of the ‘Ford, but when the “disappearing lake” was built, the cemetery was moved. I have a slight memory of going with Mama and Grandmother one year to the Basin Cemetery to spruce up family graves.

I remember it as being a dusty, thirsty place without much grass and almost no wildflowers for a little girl to pick. Then Grandad and Dad came by to see how we were getting along and rescued me with a drink of lemonade. (Grandad loved to take lemonade with him to work.)

I don’t have a picture of that old graveyard, but I wish I did. I love to see if my memory is anywhere close to what really was.

Anybody remember that cemetery? Have a picture of it you would share?

I’m very grateful to have these pictures. They’re copies of Dad’s cousin’s pictures she gave him a few years ago. If the cousin hadn’t shared, we wouldn’t have any pictures of what was. I cherish those old memories.

How about you? Do you enjoy old stories about your family? Do pictures mean a lot to you like they do us?